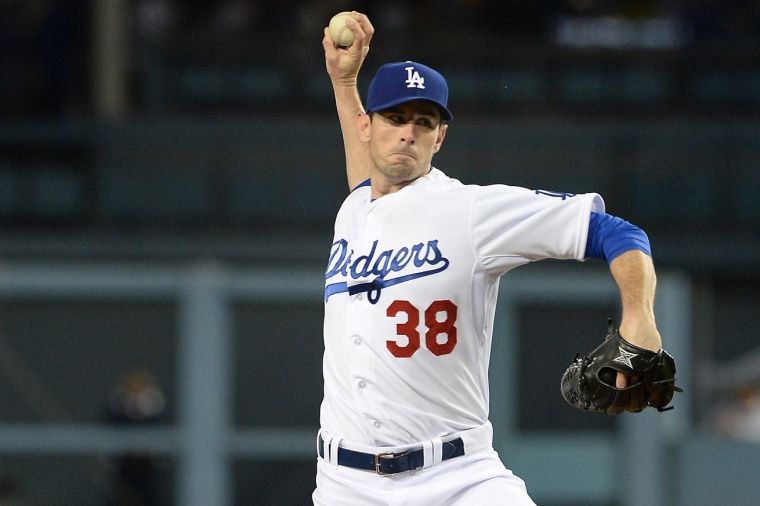 With staff ace Clayton Kershaw on the shelf until at least mid-July nursing a lower-back ailment, members of the Dodgers‘ latest starting rotation crew are set to close out the first half of the season on a strong note before earning four days of well-deserved rest over the All-Star break.

On Friday night, newly acquired right-hander Bud Norris stepped into Kershaw’s old slot in the rotation, and although he wasn’t quite as dominant as the often referred “best pitcher on the planet,” Norris delivered perhaps his best performance of the year, throwing six scoreless innings against the Colorado Rockies.

Despite having both excitement and apprehension about the trade and joining his new team, Norris used the charge to crank up his heater to 95 MPH more than once, allowing no runs, just two hits, one walk and striking out eight.

“Yeah, I mean, with the stadium, the fans, the crowd, everything else, it’s an adrenaline rush,” Norris said. “You’ve got to slow the game down, as a pitcher, that’s what they say, first and foremost.”

On Saturday night, lefty starter Scott Kazmir picked up where Norris left off, turning in his own six-inning effort at brilliance. Like Norris, the 32-year-old Houston native frequently touched 95 MPH on the gun, holding the Rockies to just three hits while striking out 10 batters.

After the game, Kazmir told the media that he had revisited an old pregame drill that he had utilized in the past to aid in preparation in hopes of starting the game in smoother fashion than in the initial innings of previous outings.

“I talked about it the last start, we were going to make some adjustments in pregame and that’s what we did,” Kazmir explained. “Kind of a simulated inning after the warm up, it seemed to kind of lock me in a bit, and get me more prepared.”

To add to the excitement, Brandon McCarthy will take the hill for the Dodgers on Sunday after recovering from Tommy John surgery, a little over 14 months after appearing in his last major league game.

With the fans’ moods feverish and expectations soaring in hopes of making some type of run at the division-leading Giants, the level-headed McCarthy told reporters that he’ll treat the game like any other pitcher should on his path of recovery.

“I don’t want it to be anything different than just a start,” McCarthy said. “I understand there’s something there to it, but I’m trying not to place any mental importance, the same with any step in a throwing program. It’s just kind of another step along the way. As soon I start focusing on things that are outside my control, it becomes a little too much.”

Dodgers’ manager Dave Roberts said there will be no set pitch count or innings limit imposed on McCarthy.

By having McCarthy throw on Sunday, it affords 19-year-old Julio Urias an extra day of rest. Last Tuesday against the Brewers, Urias notched his first MLB win while coming off his longest outing of the year — six very productive innings of two-hit, two-run baseball. Urias will start the series opener against the Baltimore Orioles on Monday night.

While the club did confirm that Brock Stewart was optioned to Oklahoma City to make room for McCarthy on the 25-man roster, the 24-year-old righty will continue to polish his craft at Triple-A, while remaining on call in case of any potential injuries to the starters on the big league roster.

Meanwhile, Hyun-jin Ryu has made seven rehab starts, slowly but surely making his way back to the rotation. He had to take a few weeks off in the middle of his rehab due to shoulder soreness, but he got back on the mound on June 12 and has since taken all of his scheduled turns. The Dodgers are expected to decide before the beginning of the week whether Ryu will make on additional start on the farm, or dive headfirst into the big league rotation sometime next week.

The Dodgers have now won eight straight games at home, and five of their last six overall.

One thought on “Dodgers’ Latest Rotation Combo Poised to Deliver”