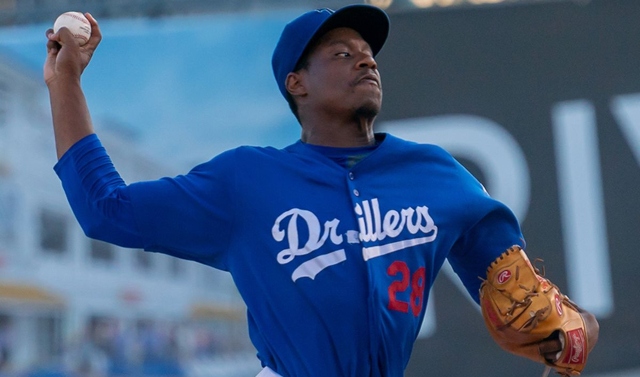 Continuing along with the highlights of the best players in the minor leagues, we now move on to the top starting pitchers on the farm—a department of the Dodgers which has traditionally been among the best in baseball.

There isn’t as much quantity that there has been in recent years, but the quality of talent certainly stand alone. Conceivably, the Top 3 starting pitchers on the following list wouldn’t have a problem making the MLB squad of several lower-tier organizations.

It might also be worth mentioning that there has been quite a few starting pitchers recently who have made perhaps permanent transitions to relief. That particular list includes names like Caleb Ferguson, Dennis Santana, Josh Sborz and Jordan Sheffield. Despite these transitions, the Dodgers are still left with a handful of very talented starting arms.

As far as our parameters go, we define a prospect as a player who is 25 years of age or younger and who hasn’t played more than a half a season in the majors. The final determination is based on which prospects have the highest ceilings and which players are the most MLB-ready.

Admittedly, I’m personally not big on ranking prospects in the least, as I don’t get many opportunities to evaluate all the minor league players in person. However, based on statistics and progressions through the system, it’s not overly difficult to assemble a fairly accurate list.

5. Gerardo Carrillo—Undoubtedly, the fifth spot on this list was certainly the toughest to decide. While the ceiling of Gerardo Carrillo is incredibly high, his command is the biggest reason that he hasn’t rapidly ascended through the system. He’s still only 21 years of age, so there’s plenty of time to develop. Moreover, he has the capability to crank his heater near triple digits, which always could play well in relief, if needed. The right-handed native of Mexico is looking to make big improvements in 2020 after posting a 5-9 record with a 5.44 ERA and 86 strikeouts over an even 86 innings of work last season at High-A Rancho.

4. Mitchell White—Between Double-A Tulsa and Triple-A Oklahoma City in 2019, Mitchell White went 4-6 with a 5.09 ERA and a 1.30 WHIP over 23 appearances and 92-2/3 innings. He still struck out 105 batters, which could be one of the factors that led the Dodgers to add him to the 40-man roster. That said, it wouldn’t be surprising to see the 25-year-old right-hander in the majors at some point in 2020, especially if he can contain the most prominent hitters in the Pacific Coast League. At this stage,  scouts say he’s projected to be a mid-rotation starter at the peak of his career. He has thrown in relief at different points of the past few seasons, so a bullpen role sometime down the road isn’t necessarily out of the question.

3. Tony Gonsolin—By year’s end, Tony Gonsolin may very well be a pitcher who ultimately joins the team as a reliever. At 25 years old while having an even 40 big league innings under his belt, the righty is on the fringe as far as our prospect qualifications go. He made 11 appearances—six of which were starts—in the majors last year, narrowly missing being included on the NLDS roster against the Nationals. Across all levels last season, he made 24 appearances and threw 81-1/3 innings. Quite possibly, the continued development of his splitter could eventually be the difference of him emerging an elite or just an average MLB pitcher.

2. Josiah Gray—In 26 games (25 starts) combined last season between Low-A Great Lakes, Rancho and Tulsa, righty Josiah Gray finished with an 11-2 record and a 2.70 ERA with 147 strikeouts against just 31 walks. In September, the Dodgers crowned the 22-year-old New York native as the 2019 Branch Rickey Minor League Player of the Year. Gray started his 2019 season in the Midwest League, posting a 1.93 ERA in five starts before being promoted to Rancho. Over 12 starts in the hitter-friendly Cal League, he went a perfect 7-0 with a 2.14 ERA, a 0.97 WHIP and a .209 opponents’ batting average. After earning a promotion to Tulsa on July 17, Gray pitched to the tune of a 2.75 ERA across nine games (eight starts) for the Drillers.

1.  Dustin May—Unquestionably, Dustin May is far and away the best starting pitching prospect in the organization. Last season, the 22-year-old righty went 6-5 with a 3.38 ERA and 110 punchouts over 106-2/3 innings of work between Tulsa and OKC before making his MLB debut in August. Because of his elite velocity and diverse repertoire, some pundits believe that May could have the highest ceiling among all the pitching prospects in the entire Los Angeles system. If he’s not among the big league starting rotation come September, he should be in the relief crew, barring any type of significant injury.

Other players who were considered for this list include Edwin Uceta, Michael Grove, Leo Crawford, Andre Jackson and Ryan Pepiot.

Additionally, 24-year-old southpaw Victor Gonzalez, who also recently joined the club’s 40-man roster, could see significant time as either a starter or a reliever during his upcoming campaign.

7 thoughts on “Dodgers Prospect Watch: Ranking the Top 5 Starting Pitchers on the Farm”