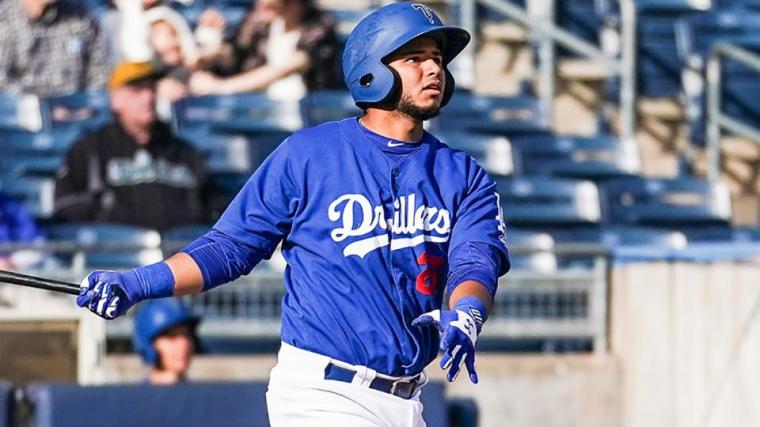 While most of our regular readers already know that we’re huge on prospect insight here at TBPC, we’re not big on rankings, though, as we don’t get many opportunities to evaluate all the organizational prospects in person. However, once every winter I do my own version of positional player rankings, which oftentimes gives us a good idea of the general depth of the Dodgers across the minor league board.

When we assembled this list last November, we saw four of the 11 players named make some type of contribution to the big league squad during the 2018 campaign. The same can be said of our 2016 rankings when another four players made some kind of impact in the bigs in 2017. In 2015, six of the 11 players we named were called up to the majors at some point of the 2016 season.

As far as our parameters go, we define a prospect as a player who is under the age of 25 years and who hasn’t played more than a half a season in the majors. The final determination is based on which prospects have the highest ceilings and which players were the most MLB-ready among each position’s groupings. This is by no means a list of the best prospects in the entire system, but rather a list of the players who are among the best at their respective positions.

There are a few returning players this year, but there are also quite a few departures. Tim Locastro, Drew Jackson and Yusniel Diaz were on the list last winter, but Locastro and Diaz were eventually traded to American League clubs while Jackson was claimed by the Phillies in this year’s Rule 5 draft. Consequently, Joe Broussard and Matt Beaty have graduated from our rankings because they are older than 25 years. Finally, Walker Buehler and Caleb Ferguson are gone because of their extensive amount of playing time in the majors last year.

All that said, these opinions are mostly subjective and original and aren’t sanctioned or endorsed by any group or entity other than us at this site. Without any further rambling, here is an overview of our top Dodgers prospects by position:

Even though Will Smith may be a few ticks ahead of Keibert Ruiz in terms of being MLB-ready, Ruiz is believed by many to have the superior skill set. The 20-year-old native of Venezuela spent all his time at Double-A Tulsa last year, where he hit .268/.328/.401 with 12 long balls in an extremely pitcher-friendly Texas League. He was named to the club’s 40-man roster in November, which means he’s almost guaranteed big league action in September of 2019. We took an in-depth look at the switch-hitting backstop as recently as last March.

Defensively, Edwin Rios has appeared at several positions over the past few years, but first base may very well be his natural spot. In 2018, Rios spent the entirety of his campaign at Triple-A Oklahoma City where he played some third base, a little first base, and 17 games in left field. Injuries held him back during the early stages of the season, but the 24-year-old lefty hitter still rebounded to slash .304/.355/.482 with double-digit home run numbers. We profiled Rios thoroughly back in the summer of 2017.

While it seems like Omar Estevez has been around forever, the right-handed hitting Cuban infielder is just 20 years of age. Scouts still believe his ceiling to be high on offense, especially if he can learn to be patient at the plate. At Single-A Rancho last year, he hit .278/.336/.456 with 15 homers and a whopping 43 doubles.  He has a solid glove, but scouts believe he’ll settle in at the keystone, mainly because of his lack of arm strength in the hole at short.

Speaking of the Quakes, Cristian Santana was one of the team’s most successful sluggers, hitting 24 long balls and driving in 109 runs, all while sporting a .274/.302/.447 slash line. Santana played all over the diamond last season, but he’s probably better suited for the hot corner, as his arm is by far one of his best assets. We put together a concise profile of Santana last December.

Alex Verdugo has appeared on this list since its inception three years ago and with Buehler having relinquished his prospect status, has elevated to the top spot in the Dodgers rankings. The Tuscon native is just 22-years-old, but many feel his days of being a prospect have run their own course, as he’s about as big league ready as he’ll ever be. He can capably handle all three outfields spots, and he has one of the best arms in the entire system. He tallied 77 AB in the majors last year, slashing .260/.329/.377 with six doubles.

Seemingly, DJ Peters has racked up almost every possible offensive award in the minors. He was named Player of the Week six times across three levels, he garnered about a dozen All-Star nods, and he was even named the Cal League Player of the Year in 2017. Like Verdugo, Peters can handle all three outfield spots, and his speed is deceptive, giving him exceptional range on defense and making him a threat on the bases. Last year, he earned a big league spring training invite, and eventually slugged 29 homers and 23 doubles. We took a detailed look at Peters back in March of 2017.

The right-handed starting pitcher spot was the toughest to decide on this list, especially when considering the types of seasons that Tony Gonsolin and Dustin May had. However, I still chose 22-year-old Dennis Santana for this spot, as his ceiling is among the highest in the entire organization. The Dominican native made his major league debut last June, but was shut down shortly thereafter with severe rotator cuff problems. Before his promotion, the righty flamethrower posted an 11.8 K/9 and a 2.54 ERA over 10 starts between Tulsa and OKC. Santana was kind enough to sit down with us for an interview in the fall of 2017.

The lefty starting spot was another difficult choice to make, not because of the overwhelming number of candidates, but because of the lack thereof. We ultimately settled on Leo Crawford, primarily due to how well he threw for the Quakes in the hitter-friendly confines of the Cal League last year. After being promoted to Rancho from Low-A Great lakes in July, the 21-year-old southpaw posted an 8-0 record with a 2.77 ERA with 61 punchouts over 11 starts.

Finally, Marshall Kasowski was one of the most impressive relievers on the farm last season, having emerged pretty much out of nowhere. The 23-year-old righty threw across three levels in 2018, but garnered the most attention at Rancho in the Cal League. Over 16 appearances for the Quakes, he registered a microscopic 1.14 ERA with a 0.887 WHIP alongside an absolutely ridiculous 16.7 K/9. Over his two years in the system, the West Texas A&M product has tallied an overall 14.6 K/9. We took a close look at Kasowski last June.