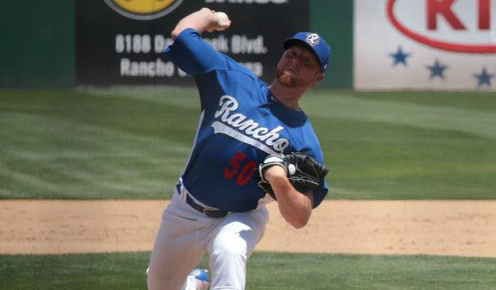 Looking across the entire length of the Dodgers‘ farm system, it’s very difficult to find a consistently effective reliever, especially one at the lower levels of the organization. In spite of that, one golden arm which is already beginning to pay dividends is that of Shea Spitzbarth. During 2017 spring training, the 22-year-old native of Staten Island raised many eyebrows with his fine performances over the course of Cactus League play. So far during the regular season, the young righty has already amassed five saves for Single-A Rancho Cucamonga while posting a 0.96 ERA with 14 strikeouts over 9-1/3 innings of work.

“I’m just learning about him, too,” pitching coach Rick Honeycutt told Ken Gurnick of MLB.com in March. “I like how he comes right at you, just so aggressive, no fear. Obviously, good stuff, but sometimes guys think their way into negative things. Then other guys just want an opportunity to open some eyes.”

Spitzbarth took a few moments away from his busy schedule last week to sit down with TBPC and talk baseball, while giving fans of the Dodgers an inside peek at one of the system’s more promising, up-and-coming relief pitchers.

To open the conversation, Shea told us a little bit about his favorite players as a youngster and the real meaning behind his first name.

“Growing up, my favorite players were Adam Wainwright and David Wright, Spitzbarth said. “The reason I would say Wainwright is because he’s a winner, plus I try to emulate his 12-6 curve ball. And Wright, just because of the way he plays and carries himself.”

He continued, “Right now, having Aces as my representation—the same as David Wright—is also pretty cool. I grew up a huge Mets fan. Being named after Shea Stadium definitely played a big part.”

Having attended Moore Catholic High School in New York, Spitzbarth went on to play baseball at Molloy College where he immediately saw time as a starting pitcher.

“Being at Molloy was great and I have no regrets about going there,” he said. “I built special relationships at Molloy and earned an outstanding degree. As a freshman, I pitched right away in the starting rotation—an opportunity that many kids don’t see. Being a leader there definitely helped me prepare for pro ball. Probably my only regret is not bringing home a Conference Championship.”

Hoping to be nabbed in the 2015 MLB Draft, Spitzbarth was never selected, despite taking part in favorable workouts for a number of different clubs. Regardless, receiving a free agent deal with a reputable franchise like the Dodgers was a bit of a consolation.

“Going undrafted was tough, especially enduring those three days without my name being called,” he explained. “Still, signing with a prestigious organization such as the Dodgers was incredible.”

Diving into the mechanical aspect of his game, Spitzbarth, who is 6 feet 1 inch tall and 195 pounds, told us a little bit about his delivery and pitching repertoire. He features a traditional, over-the-top arm motion that oftentimes catapults his heater well into the mid-nineties.

“The pitches I throw are a four-seam, a curve ball, and a change,” he explained. “Not a ton of movement on the fastball, but when I get it elevated, it moves. With the four-seam, I sit around 92-94 MPH while topping out at 95. Curve balls normally come in under 81.”

Looking back at the most prominent figures so far during his young baseball career, Shea said it was difficult to name just one or two.

“I couldn’t just point out one name as far as influence goes, but I would say all of the pitching coaches and coordinators at spring training. They really help you a lot and are there if you need anything at all,” he said. “And off the field would be my father—being with me from the start and all the support that he gave me.”

In 2016, Spitzbarth posted a 1.91 ERA with 43 strikeouts and six saves over 28-1/3 innings of work, helping Low-A Great Lakes capture the team’s first Midwest League Championship in 10 years. Moving forward, he notes that he’d like to be part of another championship run, but more importantly, hopes to build on his experience gained from his nine appearances during 2017 Cactus League play.

“I don’t really have many goals, but I think just to progress from last year in Low-A and transfer my success from spring training to Rancho. Also, winning another championship with one of our affiliates.”

Looking ahead, based on his early success at High-A ball alone, it wouldn’t be surprising if Spitzbarth earned a promotion to Double-A Tulsa at some point during the 2017 campaign. Fitting the prototypical mold that Andrew Friedman and his management crew seek out in player prospects, Shea’s exceptional skill set and remarkable work ethic should play large while climbing his way up the organizational ladder in rapid fashion.

5 thoughts on “Dodgers Prospects: A Quick Conversation with Shea Spitzbarth”