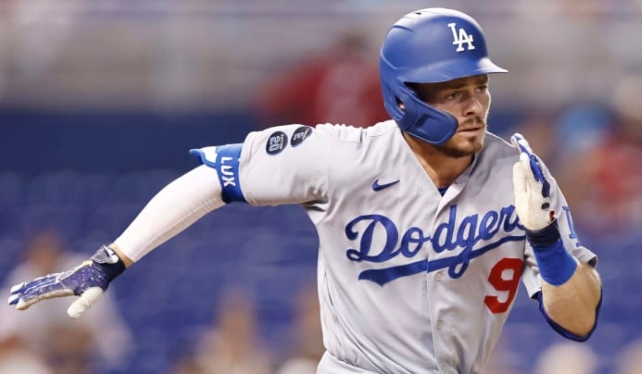 Powered by five strong innings from starter Clayton Kershaw and big offensive games from Corey Seager and Gavin Lux, the Dodgers held off the Reds on Sunday, 8-5, to claim a much-needed weekend series victory.

After falling to the Reds in Friday’s opener 3-1, Los Angeles took the final two games of the series in convincing fashion.

As the Dodgers continue their winning ways, the race for the National League West division title may conceivably boil down to the final days of the season. At the beginning of Sunday’s games, Los Angeles trailed the Giants by two full games. The Giants will try for a sweep later Sunday against the NL East-leading Braves.

Kershaw looked outstanding. One of his few blemishes came after Nick Castellanos doubled in the fourth inning, advanced to third on a wild pitch, then scored on a Tyler Stephenson groundout to shortstop. Kershaw went five full innings, surrendering three hits and no walks while striking out eight batters on 74 pitches.

The win was Kershaw’s first since June 27 when he went eight full innings against the Cubs. His appearance on Sunday was one inning and 24 pitches more than his previous outing last Monday against the Diamondbacks.

The Dodgers got on the board first when Will Smith hit his 25th homer of the year into the left field stands. After a Chris Taylor double to left, Lux hit his seventh homer of the season to extend the lead to three.

The Dodgers struck again in the third after Corey Seager hammered a 420-foot homer to right-center field off Cincinnati starter Wade Miley, also scoring Albert Pujols. The blast was Seager’s 10th of the season. Three batters later, Lux drove home Chris Taylor on a groundball single to center, stretching the lead to six.

Lux finished the day by going 3-for-4, raining his season average to .239.

The six-run effort chased Miley from the game after just three full innings. Miley surrendered the six runs on nine hits and a walk while throwing 64 pitches.

As promised by skipper Dave Roberts, Kershaw was piggybacked by righty Tony Gonsolin, who promptly surrendered a homer to rookie TJ Friedl, which was coincidentally his first MLB hit. After a nearly clean seventh frame, Gonsolin was pulled in favor of Blake Treinen with one out in the eighth after he allowed a double to Jonathan India that scored Friedl and cut the lead to three.

India came around to score when Castellanos singled to right, cutting the Los Angeles led to two. Both Cincinnati runs in the eighth were charged to Gonsolin.

The Dodgers added insurance in the top of the ninth when former Dodger Kyle Farmer air-mailed a throw to first, allowing Mookie Betts to score. Trea Turner scored after Seager drew a one-out bases-loaded walk, extending the lead to four.

Kenley Jansen threw the ninth, allowing a solo homer to Joey Votto before sealing the win.

After an off day on Monday, the Dodgers will land in Denver for a three-game set against the Rockies, who have climbed to within six games of the plummeting Padres in the West.

Including the series in Colorado, just four series remain in the regular season for the Dodgers.