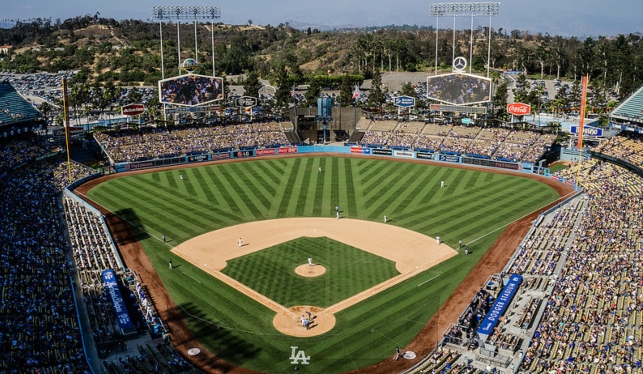 In what has been a drawn out saga through a long spring without sports, it appears that baseball might finally be close to returning.

The owners and the Major League Baseball Players Association have been volleying proposals back and forth for when baseball will return for a couple months. Well, the players have been offering new proposals. The owners have basically been returning the same proposal back, just in slightly different forms. Today, it seems the players union has finally had enough.

In a letter to the owners, the MLBPA stated that they felt that the owners were not actually willing to negotiate, and as such, asked when and where the players should report to start the season.

From the letter from the MLBPA: “If it is your intention to unilaterally impose a season, we again request that you inform us and our members of how many games you intend to play and when and where players should report. It is unfair to leave players and fans hanging at this point.”

The letter also goes on to state, “We demand that you inform us of your plans by close of business on Monday, June 15”. 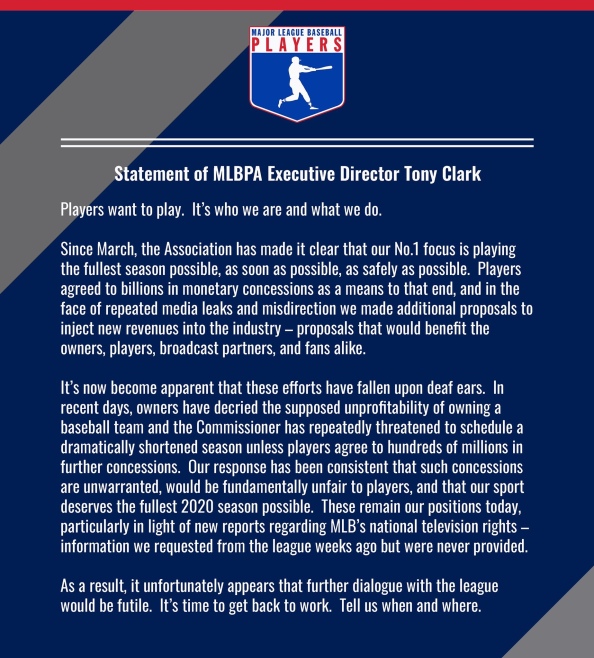 Jon Heyman and others are reporting that the vote was near unanimous by the players’ executive board to halt negotiations with the owners, presumably because time is slipping away to get a season completed before the September 27th end date self-imposed by the owners. Networks have shown an unwillingness to broadcast playoff games past the end of October.

 As of this point, it is also uncertain if owners and players have reached an agreement on health and safety protocols. While we are still in the throws of the pandemic, this seems like important stuff to still be decided.

The coming days will see the details ironed out and when exactly the season will start again. But the animosity between owners and players will linger long beyond the resolution of play for 2020. The inability or unwillingness of the owners to even negotiate with the players will set up a contentious negotiation process for the next Collective Bargaining Agreement coming in 2021.

A front office employee on a forced short season:
"I think you’ll have players sitting out, lack of interest in them doing anything team PR/Marketing wise, quality of play could suffer and then just the ongoing distrust between the league and union—setting up for an awkward 2021"

Regardless, the players seem to be ready to get back to work. Many Dodgers have already taken to Twitter to express their desire to get the season started.

We want to play! Tell us when and where! We’re ready! https://t.co/Gc8jxoAuGE

By Monday evening, we should know more of the exact details about the start of the season. Until then, it seems that we finally have a season to concretely look forward to, even if the future of the sport itself is uncertain.

16 thoughts on “Players to Owners: ‘Time to Get Back to Work’”