In a move many fans feared might happen, today Major League Baseball announced that Spring Training has been halted, and that the start of the season has been moved back at least two weeks to April 8th while worries about the coronavirus abound.

MLB follows suit with the other major sporting programs who have recently also suspended their seasons. Last night, after a player for the Utah Jazz tested positive for the virus, the NBA suspended the rest of their season. Today, the NHL and MLS also halted their seasons already in progress. The NCAA has also canceled all conference tournaments and March Madness.

Baseball is a little different in that the season hasn’t really begun yet, allowing for a little bit more flexibility and planning. It has not been stated yet whether the season will be played in its entirety or whether it will be a shortened season. These details surely will be ironed out in the days to come.

Minor League Baseball has also delayed the start of its season, although officials did not give a prospective start date.

MLB had started to deal with the effects of the coronavirus on Monday, limiting press access to players and to locker rooms. They also had set guidelines for players interacting with fans, like carrying their own pens and having pre-signed items. Things have moved quickly in the last three days. 

The Dodgers issued this statement today as well: 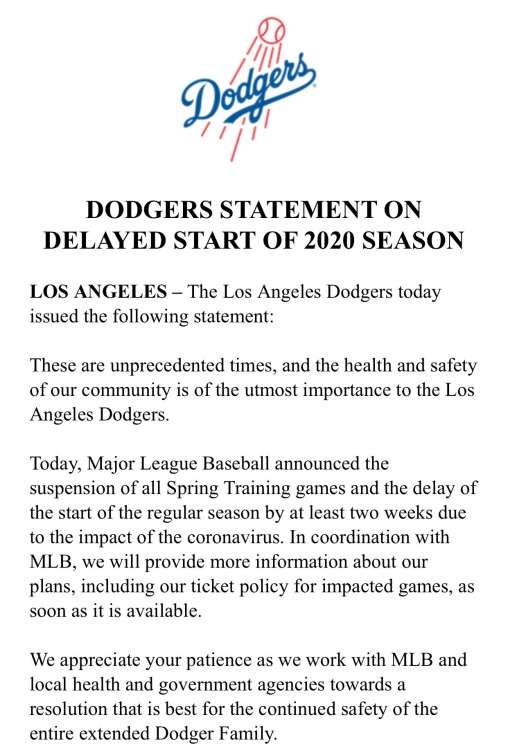 As of now, it appears that most, if not all, of the Dodger players will be staying at Camelback Ranch and continue to train for the time being. Manager Dave Roberts told reporters that he was unaware of any players that were going home, but that they would be allowed to go home should they so chose. He also mentioned that the training will be dialed back.

Holding steady in their training will be fine for position players. They can continue to get their bat work in and sharpen their defensive skills. The pitching staff is what could be an issue. Starting pitchers were currently in the middle of stretching themselves out to be ready for the beginning of the season.  Simulated games among teammates may become commonplace. 

Things will become more clear as the days and weeks pass by. In these unprecedented times, it is imperative that all safety precautions are taken so that the most people can remain safe. It is unfortunate, however, that the sports world cannot be there for us when we need it the most.  Everyone stay safe, and we here at Think Blue Planning Committee will continue to provide updates as information becomes available .