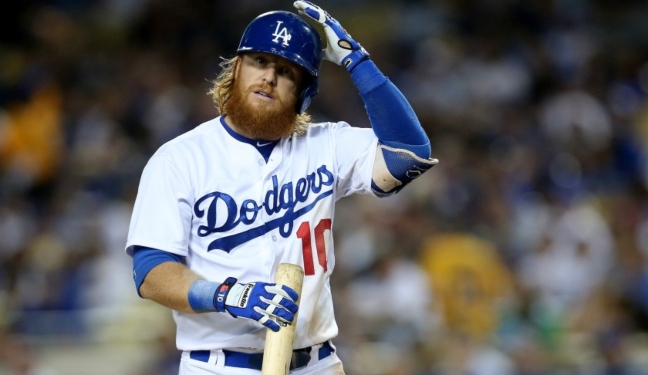 When rumors first surfaced about the Dodgers making a play for free agent third baseman Anthony Rendon, things were conceivably setting up quite nicely. The team finally had some excess money to spend, and what better way was there to invest those funds than satisfying their long-term need at third base?

Once Rendon was taken off the board, interest shifted to another third baseman, this time to nine-year veteran Josh Donaldson. However, Donaldson’s value has seemingly risen this winter, as some teams appear to be ready to offer him a contract four years in length—something the Dodgers are very unlikely to do.

Of course, there’s no immediate hurry to find a third baseman, but it’s something the team is undoubtedly considering. Justin Turner is about to begin the final year of his contract, and as much as he is a fan favorite, chances are a quite slim that he returns—at least to play third base.

Earlier in the offseason, we explored the principles of deal with the Cubs for Kris Bryant. Indeed, there are many things that would complicate the deal, including the open grievance which may or may not ultimately deem Bryant a free agent at the end of the 2020 season. Regardless, after looking at the potential demands of the Cubs, coupled with the fact that Bryant is a much worse defender than Turner, we deemed that the Dodgers would be better off focusing their needs elsewhere, at least regarding the 2020 season.

On a side note, Zachary D. Rymer of Bleacher Report put together a story earlier this week mentioning a few potential trade proposals involving Bryant. As many of you know, I’m not big on hypothetical deals and this is a big reason why. Rymer suggested the Dodgers send Alex Verdugo, Dustin May and Dennis Santana to Chicago in return for Bryant—a proposal that is almost laughable from every imaginable angle.

As far as free agent options go, there isn’t much available unless you find somebody like Asdrubal Cabrera or Todd Frazier attractive. In terms of defense, even the not-so-sure-handed Bryant probably profiles better than both of these veterans. Furthermore, neither Cabrera nor Frazier would solve the Dodgers’ long-term need at third base.

On the fringe, Enrique Hernandez, Chris Taylor, Matt Beaty and even Edwin Rios can handle duties at the hot corner, but none seem to fit the team’s mold to hold down the regular duties into the foreseeable future. Max Muncy has spent time at third base in the past, but his efforts have produced less than desirable results. Moreover, there has been plenty of fan-based chatter about shortstop Corey Seager eventually relocating to third, but there has been no signal whatsoever from management that this is the team’s desired plan.

Looking at the farm, the team apparently did not value Cristian Santana enough to protect him from the Rule 5 draft a few weeks ago. What’s more, Kody Hoese and/or Miguel Vargas are undoubtedly quite a few years away from their respective MLB debuts.

With Zack Cozart and Marwin Gonzalez at the forefront, the 2021 free agent class at the hot corner does not have anything intriguing to offer in the least.

In the end, a trade may be the club’s best option. These scenarios are usually almost always impossible to predict (see the notes regarding Bryant above), but one name that is extremely interesting is that of Colorado third baseman Nolan Arenado. Chances are awfully slim that the Rockies move the 28-year-old superstar to a division rival, but crazier things have happened.

As the 2020 season approaches, the Dodgers’ plans at third are something definitely worth watching for any hints of what may lie ahead in the future.

15 thoughts on “Dodgers Roster: What Are the Future Plans at Third Base?”