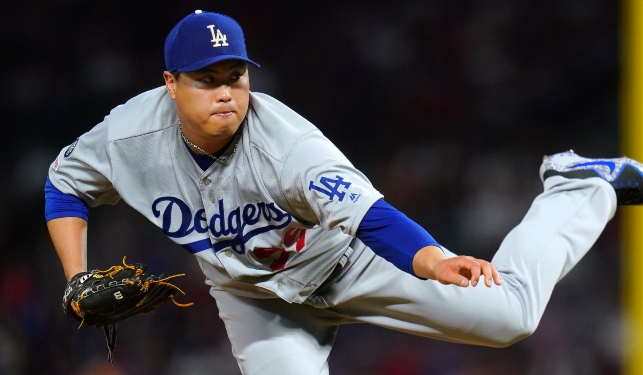 Despite having one of the most prolific offenses in baseball, the postseason success of the Dodgers this year may ultimately fall on the shoulders of the starting rotation.

Some will argue that the bullpen is the most integral part, but if the starting pitchers can consistently go seven-deep throughout the playoffs, it keeps the relief crew out of the game, thus making the contest much easier to manage and control for skipper Dave Roberts.

On Friday night, ace Clayton Kershaw proved that he still has what it takes to go deep into games. Against one of the most productive offenses in the National League, Kersh nearly went a full seven innings. His final line was 6-1/3 innings pitched with just two earned runs surrendered on four hits and three walks while striking out five. It wasn’t exactly Cy Young material, but the way CK blended his pitch selection and varied his velocity mostly left the Mets stymied.

On Saturday night, Hyun-Jin Ryu gets his opportunity to show the baseball world if he’s up to the same challenge. Specifically, Ryu is looking to reverse a trend that has seen him go from early-season Cy Young favorite to just another lefty with mediocre stuff.

At the halfway mark of the season, Ryu didn’t just earn his way onto his first-ever All-Star squad, he was also selected to make the start. At that point in time, in 17 starts, he had a 10-2 record with a 1.73 ERA with 99 strikeouts over an even 109 innings of work. That’s an average of 6-1/2 effective innings per start—something the Dodgers would be delighted to see from the southpaw in the 2019 playoffs.

Ryu was still productive for a short time after the All-Star break. One of those games came at the dreaded Coors Field, where he held the Rockies scoreless on just three hits and a walk over six full innings of work.

When Ryu went on the injured list at the beginning of August with a sore neck, his ERA was still sitting at a stellar 1.53.

Whether the injury was bonafide or just an attempt by management to provide him some rest, Ryu came back with a vengeance against the Diamondbacks on August 11, throwing seven scoreless innings and scattering just five hits in the Dodgers’ 9-3 victory.

However, it was at that point the wheels began to fall off.

In his four starts after the win against the Snakes, Ryu failed to make it into the sixth inning each time. He was bludgeoned in back-to-back games against the Yankees and Arizona on August 23 and August 29, getting tuned up for a combined 14 runs on 14 hits—three of which were long balls.

Over those four games, Ryu had an 0-3 record with a whopping 9.95 ERA, surrendering 21 earned runs on 31 hits over just 19 innings. During that same time frame, he also issued seven walks, something that is uncharacteristically rare for the lefty.

“To be completely honest, this year has been really good in terms of conditioning and my health,” Ryu said through his interpreter a few weeks ago. “Just by the feel of things, I feel really good.”

Most of the pundits around the league chalk up his recent performances to poor command. That would explain the high number of walks and his propensity to leave so many balls hanging across the heart of the plate.

With 13 games remaining on the regular-season schedule, that probably means three more starts for Ryu, including Saturday’s middle game in New York. His final start will conceivably be a quick tune-up of just a few innings as a precursor to the NLDS.

That doesn’t give him much time to straighten things out.

For the sake of the Dodgers on their quest to capture their first World Championship in more than 30 years, hopefully he does.

6 thoughts on “Will Hyun-Jin Ryu Regain All-Star Form in Time for Playoffs?”