If you’re one of the millions of people enjoying the show This Is Us, you’ll know that Randall and his wife Beth do a thing before a big event called “Worst Case Scenario.” They vocalize the worst things that could happen, in thought that they could prepare themselves for such an instance. Today, the day before Opening Day, we are going to do that. Vocalize our worst fears, in anticipation of them happening and setting ourselves up to deal, or, more likely, them not happening and our worse fears never being realized.

It may seem silly to have such grave concerns about a team that was so close to winning the World Series last year. But with a quiet offseason, there are definitely some spots where maybe the front office could have assuaged Dodger fans’ worries more.

I asked my Twitter friends to tell me what their biggest fears for the Dodgers were heading into the 2018 season. Aside from a few funny, but still very relevant issues like Kemp deciding not to wear the high, striped socks anymore, most fans’ worries fell into three distinct categories.

INJURIES—Losing a player or two to injury can befall any team at any time. It’s just the nature of the game. But Dodger fans are heading into the season worrying about three very specific, very good, Very Important players. Justin Turner is already on the DL after having been hit by a pitch on his left wrist in a Cactus League game. Clayton Kershaw has dealt with back issues each of the last few seasons. And while all evidence and statements from the team seem say that Corey Seager’s elbow is perfectly fine, that worry can’t help but creep into the back of Dodger fans’ minds. The Dodgers, with their incredible farm system, can weather one of these, maybe two. They’ve already done so with Kersh being out for stretches the last couple seasons, and Seager being out of the NLCS. All three at once? Well, they most likely could handle that, too. But let’s not find out.

THE BULLPEN—As of this writing, the Dodgers have not announced what the plan is for the bridge to closer Kenley Jansen. At the moment, there’s no standout guy that will be this year’s Brandon Morrow. But, to be fair, this time last year we had no idea what Morrow would turn out to be. In fact, in each of the last two seasons, that role wasn’t defined until a few months into the season. So maybe this year’s Morrow just hasn’t made himself known yet. Could be one of the newcomers, Scott Alexander or J.T. Chargois. Pedro Baez could have a bounce back season. It could just be pitching by committee, different guy every night. It’s worked out the last couple of seasons, so there’s no reason to believe it won’t in this one also.

THE STARTING ROTATION—This one has some subsets to it. Will Kershaw’s back be okay? Will Rich Hill’s bluster tear its ugly head? How about his stamina, being at his advanced age? (Which is still younger than me, but I digress). Can Alex Wood replicate last year? Shouldn’t Kenta Maeda be in the bullpen where he was a rockstar in the playoffs? How will Hyun-Jin Ryu perform after so much time spent rehabbing injuries? The ‘what-ifs’ are enough to get you. But show me a rotation in the NL West that’s better. Maybe Colorado?

There are other rotations better than the Dodgers’ overall in the NL, but first things first. Gotta win the division (or at least make the Wild Card) and this staff is capable of that. They have some starters waiting in the wings in needed. I heard this Walker Buehler guy could be ok. Julio Urias will be returning at some point during the season. There aren’t as many arms on the staff as previous years, but there aren’t as many questions about the arms, either. I know I superfluously stated them above, but there really is no reason other than irrational fear that any of the aforementioned starters will not have a good season. 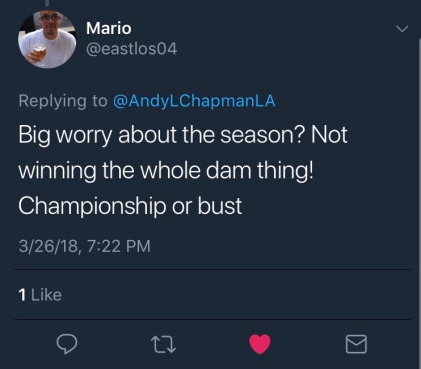 You never quite know what will happen. The Giants lost Madison Bumgarner already on a fluke come-backer. Anything can happen at anytime to any team. The Dodgers front office has set it up for the team will be good, for a long time. It’s a long season, and things won’t always go the way we want them to. But the team is really good, and so is the farm system which will help either by being called up, or being able to used in a trade acquiring who needs to be acquired.

So there. We got that all out of the way. None of that will happen and barring anything egregious, the Dodgers will be fine. Not many teams are in their position and we should try not to forget that. It doesn’t hurt to get exorcise the demons beforehand, though. Even Dodger Stadium got in on the act, with a sewer pipe erupting during the last spring training game of the year. Only good things to come this year! 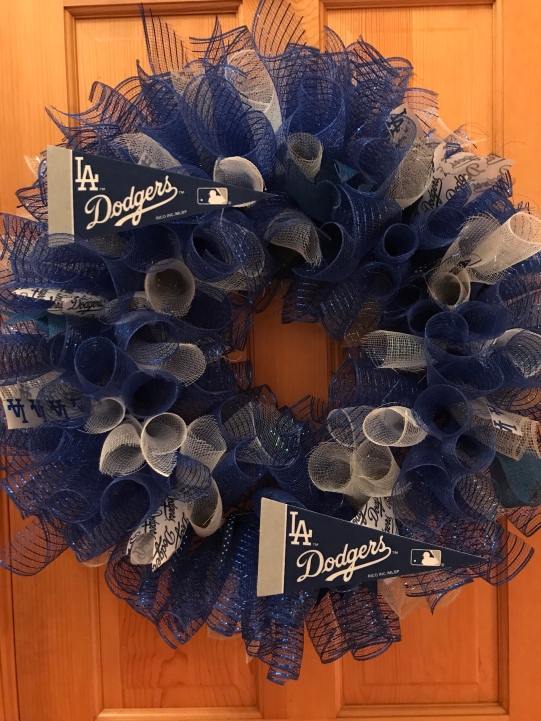 Speaking of good things, it’s time for our first reader appreciation giveaway of the season! If you would like to win this freshly handcrafted wreath for your door, all you have to do is retweet the link to this article from Think Blue Planning Committee and be following @thinkbluepc on Twitter. Everything—including shipping—is on the house. Winner will be picked at random prior to the game tomorrow. Good luck!

One thought on “Exorcising Your Dodger Demons, Plus TBPC’s First Fan Giveaway of 2018”