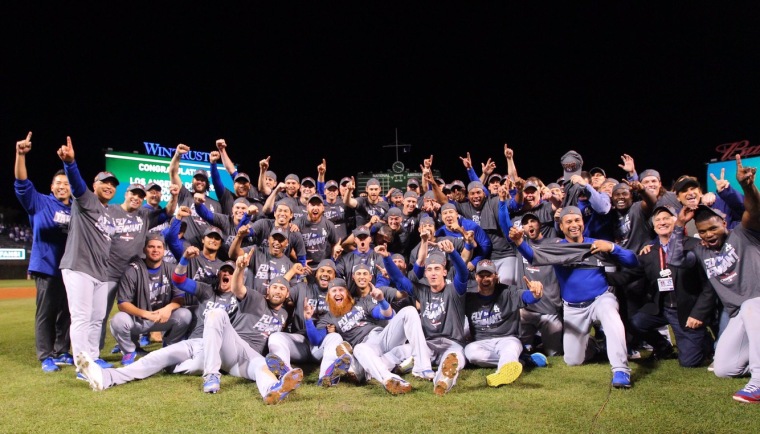 So much is made of the Dodgers‘ payroll, and how they should be the best team in baseball, because they paid for it. This is a fair assessment, but it’s also so much more than that.

Yes, during the offseason, the Dodgers had enough money to re-sign all three of their targets—Kenley Jansen, Justin Turner and Rich Hill. But there’s a little more to it than that. These guys wanted to come back to this team, to finish what they started. To these guys, it’s not about the money. By now you’ve heard the story about how Turner talked Jansen into staying the morning of Kenley’s wedding. They decided to return together, to their family.

Yes, the money has truly helped. They were able to eat the contract of Hector Olivero to acquire Alex Wood. They could hold massive contracts like Carl Crawford and Adrian Gonzalez and Scott Kazmir and Andre Either, only one of whom is actually playing for them this postseason.

But when you look at this team, really look at it, the contribution is not just coming from the big money guys like Clayton Kershaw, Jansen and Turner. It’s the lesser known, lesser paid guys that are making all the difference.

Big-time contributions are coming from Enrique Hernandez, Austin Barnes, Chris Taylor, and Charlie Culberson. Culberson had two hits for the Dodgers in the regular season. He has seven so far in the postseason, and has a 1.164 OPS while filling in for the Dodgers’ All-Star and reining Rookie of the Year Corey Seager. Barnes virtually took the starting job away from Yasmani Grandal right after the beginning of the playoffs. Taylor was stolen from the Mariners in a trade for Zach Lee, and wasn’t on the 25-man roster to start the season. And Hernandez, among many other accomplishments, hit three home runs in the series clincher. Three. As basically a back-up outfielder. Most of the national media had no idea who these guys were before this NLCS. They make $2.18 million this year combined.

The bullpen was absolutey lights out. Kenta Maeda, although disappointed he did not get a starter’s roll for the postseason, has channeled that into being excellent out of the bullpen. He has retired all 15 batters he’s faced, striking out seven in the process. Brandon Morrow retired 14 of the 16 batters he faced in the NLCS, allowing one walk and one hit with seven strikeouts.  Tony Cingrani, a deadline pickup, has allowed one hit in two full innings of work.

You also have to be able to balance the big money guys with the guys that might not have the big names or money. The front office and coaching staff has done a wonderful job assembling men who are unselfish and willing to work together to get it done. They basically paid Chase Utley $2 million to be another bench coach.

Turner told MLB Network after the game, “It’s a team. It’s literally the definition of a team. It’s 25 guys who are all in, all about doing whatever it takes to win a game that particular day, the unselfishness is incredible. You see the different platoons and guys bouncing in and out, and the lineup changes, I can’t tell you how many different lineups we’ve used all year, but it doesn’t matter. Everyone is all in, everyone wants to do whatever it takes, they understand that if they’re not starting that night, they’re going to have an opportunity to come in later and pinch-hit later in the game, and have an impactful swing, and maybe shift some momentum for us. And that all starts with Dave Roberts. He’s one of the most positive guys, the most genuine guys I’ve ever played for and his energy and his passion for each and every single guy on this team is real, and we all love playing for him, we all trust him.”

The hashtag that MLB gave the Dodgers at the start of the postseason, #ThisTeam, could not be more fitting. I haven’t even accounted in all the contributions from Yasiel Puig, Cody Bellinger, Hill, Logan Forsythe, and Yu Darvish. Production has come from up and down the lineup, and from every pitcher in the club’s arsenal. Everyone has had a role, whether they are physically with the team right now or not. In their celebration after the win, the players took turns chanting names and having players drink from the NLCS trophy. They included both Seager and Gonzalez in those chants.

It’s fitting that the club clinched on October 19th, too. The World Series berth perhaps exorcized some demons of when the Dodgers were on the receiving end of a number of opposing walkoffs. Most importantly, though,it was the 36th anniversay of Rick Monday‘s walk-off homer in Game 5 of the 1981 NLCS, sending the Dodgers to the Fall Classic. Hopefully that means this season will end the same way that one did, with a World Series Championship.