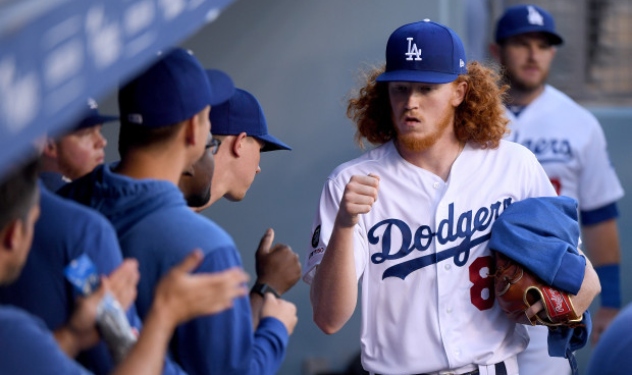 Even though chatter surrounding the controversial sign-stealing scandal dominated most of the player interviews at Dodgers FanFest on Saturday, there were still a few dialogues that pertained specifically to the field.

One of the first bits of information I found interesting is that young right-hander Dustin May told reporters that he’ll beginning the year in a starting role.

Dustin May said he will go to Spring Training as a starter.

During his time in the majors last year, May made 14 appearances, 10 of which came out of the bullpen. He also made two relief appearances in the NLDS against the Nationals.

As it stands, as many as nine pitchers may be competing for spots in the big league starting rotation. Conceivably, Walker Buehler and Clayton Kershaw could be the only two who are locks, as May, Kenta Maeda, Julio Urias, Alex Wood, Tony Gonsolin and Ross Stripling all have experience throwing in relief.

The same situation applies for the newly acquired 30-year-old Jimmy Nelson, who told reporters at FanFest that he’s finally back to being in excellent shape physically.

After two years of injuries, Jimmy Nelson said he’s 100% healthy and eager to start or relieve.

At the time of his signing, team management stated that Nelson would be given every opportunity to make the starting rotation. However, should Nelson not be among the club’s five starting pitchers, he would probably be assigned a spot in the bullpen, being that he has no options remaining on his contract.

Coincidentally, Nelson has only made two relief appearances over the course of his six-year, big league career. Both of those came back in 2014 for the Brewers.

Interestingly, Urias told members of the media that he’s comfortable in whatever role the team intends for him. Back in November, management had indicated the young lefty would likely assume a starting role in 2020, but now that the picture has become crowded, there may be an open competition during Cactus League play this spring.

Julio Urias said he learned to like relieving last year.but is happy for whatever role he has this year.

Whatever happens, it should be very interesting to see the front five starting pitchers that emerge once the smoke clears on 2020 Cactus League play. From what we can tell right now, May could be the first arm on deck at Triple-A Oklahoma City, prospectively earning a big league promotion in the event of an injury. Regardless, just because he doesn’t begin the season in the majors does not necessarily mean he won’t be there in the postseason, should the Dodgers make it that far.

Gonsolin could find himself in a similar position.

Either way, there’s certainly the possibility for disappointment among the starting rotation, especially when considering the inexperience of Buehler and Urias, the amount of wear and tear on Kershaw’s arm, the lack of late-season endurance by Maeda, and the injury histories of Wood and Nelson.

At the same time, considering the amount of potential and pure ability in the aforementioned list, there definitely lies the chance the Dodgers once again flaunt one of the best staffs in the National League.