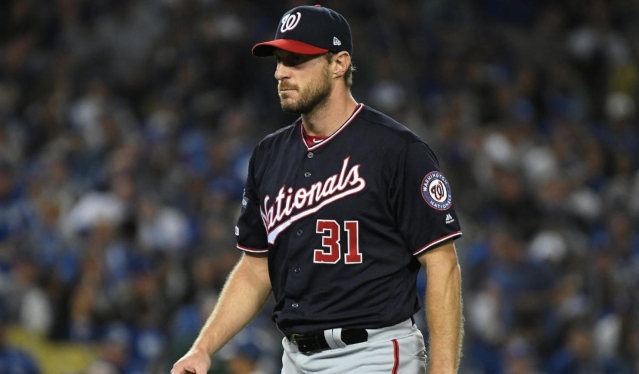 To say that Washington came through in a mandatory, must-win Game 4 would be an understatement.

Not only did the Nationals defeat the Dodgers, but they did so in convincing fashion. Riding the right arm of Max Scherzer, the Nats pitching staff limited the Boys in Blue to just five total hits, eventually cruising to a 6-1 victory and tying the 2019 NLDS at two games apiece.

Los Angeles starter Rich Hill, as courageous as his comeback has been, was spotty at best. His poor command had gotten the best of him in the end, as the veteran lefty was unable to last three full innings. Hill looked decent through two, but fell apart in the third inning after issuing three walks and a single before being replaced by righty Kenta Maeda.

Things looked good early for the Dodgers after Justin Turner took Scherzer deep in the top of the first inning, providing the Dodgers with an early one-run lead. However, Turner’s blast would be the only run the Washington pitching staff would surrender.

Once the smoke settled on his night, Scherzer threw 109 pitches over seven full innings, allowing one earned run on four hits and three walks while striking out seven.

Sean Doolittle and Daniel Hudson continued the clutch pitching for Washington, shutting down the mighty Los Angeles offense in the eighth and ninth innings en route to the win.

Conversely, the Dodgers used six different pitchers on the evening. About the only two who looked remotely effective out of the entire group were Maeda and rookie righty Dustin May.

The brunt of Washington’s damage came on one swing from veteran Ryan Zimmerman when he took Pedro Baez deep to center in the fifth. That one cut alone resulted in three runs crossing the plate.

Heading into the sixth, the Nationals had built a comfortable 5-1 lead.

Washington tacked on an insurance run in the very next frame when Trea Turner led of the inning with a ground-rule double to left.  Turner advanced to third on a Ross Stripling wild pitch and later scored when Anthony Rendon sacrificed to center. Turner scored two of Washington’s six runs on the night after reaching base three times in five tries.

The Washington victory forced a winner-take-all Game 5 in Los Angeles on Wednesday. Walker Buehler will throw for the Dodgers as the Nationals will counter with right-hander Stephen Strasburg.