While Sunday’s regular-season finale in San Francisco certainly doesn’t have any bearing on what happens in the upcoming NLDS, a victory could cement the 2019 Dodgers in the franchise history books as the squad with the most regular-season wins ever.

Currently, the Dodgers’ 105 wins are tied with the 1953 Brooklyn club for the most victories in franchise history. If you’re familiar with the works of this site, you’ll know the 1953 team is one of those squads we often refer to when looking back on the rich history of the franchise.

In comparison, both the present-day team and the 1953 squad were strikingly similar in the sense that they were offensive powerhouses. Players like Sandy Koufax and Don Drysdale were not yet part of the team, but the offensive firepower on the 1953 squad that fronted the Brooklyn attack was unparalleled at the time.

Like several other marks in the MLB history books, though, the 1953 Dodgers could ultimately have an asterisk beside their name because they tallied their 105 wins in only 154 games played. Furthermore, five players from that special squad would eventually be enshrined in the MLB Hall of Fame. 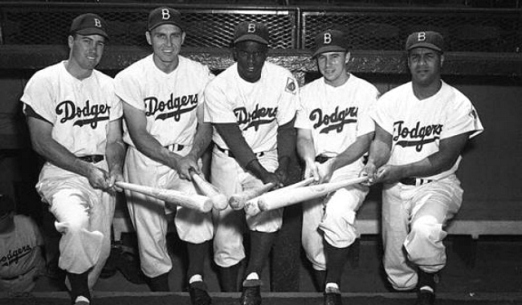 And, keep in mind, this is when many pundits put runs scored and RBI at the top of the statistical hierarchy.

The 2019 Dodgers don’t have any players who hit for average like the 1953 crew, but they definitely have the sluggers who racked up the power numbers. Similar to Snider, Cody Bellinger leads the team with a 1.033 OPS. Bellinger’s 47 long balls are just two behind the franchise record of 49, a mark set by Shawn Green back in 2001.

For all of their regular-season accolades, however, perhaps the biggest disappointment back in 1953 was that the team failed to handle the Yankees in their quest for Brooklyn’s first championship. Consequently, they would wait until the 1955 season to hoist the World Series trophy.

Let’s just hope the 2019 crew fares much better in the playoffs. Considering the final outcomes of the past two years, anything less than a World Series title will probably be considered as disappointing by many.