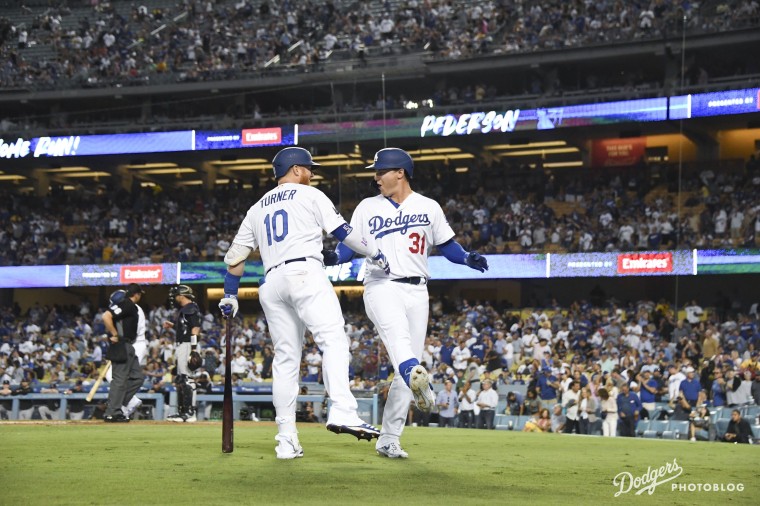 The Dodgers‘ seventh straight NL West division Clinchmas is so close, they can smell it. Their magic number sits at four, so they need a little help from the Cincinnati Reds if they want to clinch at home. The Arizona Diamondbacks are visiting Cincinnati, so all Dodger fans will be Reds fans this weekend hoping the Boys in Blue can celebrate at Chavez Ravine.

After an off day at home, the Dodgers will begin a three game series with the San Francisco Giants, and will have to win at least two game for the home clinch. Unlike the San Diego Padres and the Colorado Rockies, the Giants were not expected to do well in Bruce Bochy‘s last year as manager. The future Hall of Fame manager will be retiring at the end of this season.

The Giants are third in the NL West, with a 67-73 record. Old Friend Farhan Zaidi left the Dodgers for the Giants’ front office, and decided not to make large scale trades at the deadline. Madison Bumgarner, the Giants crotchety starter, was very much rumored to be moved at the deadline, but ultimately was not.

The Dodgers will not face Madbum during this series, however. They have one more series against each other for the last series of the regular season in San Francisco, so Max Muncy may get to hit one into the ocean yet again.

Friday night’s pitching matchup will be Clayton Kershaw, looking to give up less home runs, and Jeff Smardzija. The Shark is 9-11 on the season with a 3.61 ERA, and only has nine strikeouts combined for his last three outings, in 17.1 innings.

Saturday’s game, which can be seen on MLB Network, will see Tony Gonsolin make another start, and keep building on his impressive outings. He will face off against Tyler Beede, another righty who is 3-9 with a 5.61 ERA. Beede doesn’t go too deep into game, with 5.1 innings being the longest in his past few starts.

In Sunday’s matinee game, Walker Buehler was bumped from his expected start to give him more rest. The Dodgers will instead sent Julio Urias to the mound, making Sunday more of a bullpen game. His counterpart will be Dereck Rodriguez, the third righty of the weekend. He is 5-8 with a 5.15 ERA and only 58 strikeouts in 87.1 innings. However, he is coming off an outing against the St Louis Cardinals where he went 7.0 innings, only allowing one earned run and striking out seven.

Austin Barnes has returned from Triple-A Oklahoma City, where he was sent to work on his batting while rookie Will Smith took over the majority of the starting catching duties. Smith for his part has been slumping lately, hitting only .188 with nine hits and 18 strikeouts over his last 15 games. While his major league batting average for this season is still under .200, Barnes was hitting .264 in Oklahoma City with six hike runs in the 23 games he played there.

One of their bats needs to get going in time for the playoffs, and it will be interesting to watch what happens when they are both on the same team seemingly competing for the same spot.