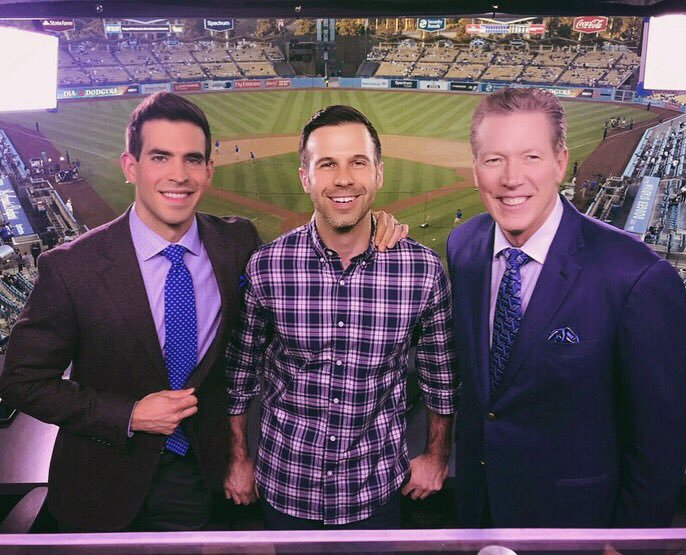 Stats have been steadily taking over the game of baseball, from launch angle to exit velocity to wOBA and everything in between. The Dodgers organization is on the cutting edge of using all stats to their advantage in regards to both pitching and batting.

The Dodgers broadcast booth is no exception. Joe Davis and Orel Hershiser blend and weave the stats and stories of the players into every broadcast. Helping them behind the scenes in the Stat department is Rick Krajewski, and he was kind enough to let me into the little world of prepping and gathering stats for a broadcast.

Rick didn’t originally set out to be the stats guy for a Major League baseball broadcast team. “I went to college with Joe, he was a year younger than me, he played football, I played baseball, we bonded over that, and we were in the same fraternity. After college we went our seperate ways. He gave me a call, four, maybe five years ago now. He said ‘Hey, I need a new stats person for some of my Fox games, and I think you might be good at it’. Honestly I didn’t even know what the job was, or that it existed. I played baseball in college, so he thought I’d have a knack for some of it. We started with a trial run that season, and I’ve been doing his Fox games ever since. Last year he gave me a call and said the guy who worked with Vin and then with him the first couple years moved, and the slot was open, and if I wanted it, the job was mine.”

Last season was Rick’s first full season in Los Angeles doing stats for the Dodgers broadcast. He was working two jobs, one at his digital marketing sales job, and then for the Dodgers. Rick finally took the full leap and quit his first job two months ago. “I’d do my day job throughout the day, and the stats stuff at night, and do it again in the morning. It was a lot to take on.  The first year was stressful, I didn’t sleep a lot. I made the decision a couple months ago to just focus on the stats stuff, and the Dodgers and see where that takes me, and now I’m strictly Dodgers.”

I asked Rick his favorite way to gather stats, and if he kept a database of any kind. “No, he said with a sigh, “I feel like I’m not smart enought to do that”. (I have no doubt that he is). “There are so many resources available, from Baseball Reference, to Statspass, which is immensely helpful, to FanGraphs.  Every series I put out a 30-35 page stat packs for the tv, the radio, the Spanish radio, and I kind of build off that. It’s kind of like a narrative of how the season’s going, how a player has been performing in the last week or so, versus throughout the season, who’s hot, who’d not, that kind of stuff. I really enjoy doing pitcher analysis and breakdowns for each series, that’s really diving deep into his player trends, his tendencies, a lot of FanGraph numbers. Statiscial averages, seeing where they rank in the league.  When I do that, I think that’s when I have the most fun. ‘Oh, they’re attacking Kershaw early in the count. Why are they doing that.’ So I really dive into the numbers and see wow, it’s because they’re hitting .400 against him on first pitch. That explains a lot. And so I get to the stadium and say “Joe, Orel, you won’t believe what I uncovered’. And they’ll say wow, this is great, and they’ll use it on air that day. I like when I can dive into more of the dorky stuff, of what the eyes are telling us but we don’t yet have the numbers to back it up.”

Later Rick circled back and amended this answer. “Sometimes Joe and Orel will just make a comment or observation and put me on the hunt to explore the stats to see if we can build a case around it. Often time we do. I think that’s the most fun…taking just a simple idea or opinion and building the case to be presented on air”.

A typical day for Rick starts with getting to the stadium around two or three for a seven o’clock game, about the same time Joe and Orel arrive. The three then talk about the previous day’s game, where the team fell short or what they were great at.  Then they discuss the open, the broadcast itself, some of the trends, and go over game notes from the day before. A lot of it is just prep is just getting ready so we have something to talk about and we have numbers and analysis to go with it.” Rick continues to provide notes and stats in game. Before he leaves, he tries to do some future prep. “So, we’re playing the Red Sox next. But I’m already working ahead for the Phillies series. I’m focused on the immediate, while also trying to focus on the future.”

For those curious, I usually make myself a card late in the game w/ ideas for stuff to look up when I get home for the next day’s game notes. This is from last night #Dodgers

When asked about how much prep Joe and Orel do on their own, Rick demures to the on-air crew. “It’s always interesting, they always say, oh we’d be lost with you. But if my role was somehow cut, they would be just fine. They are two of the best, if not the best, at what they do. Joe really focuses, like Vin would do, on the stories of the players themselves, things I’m not really focused on. What I really focus on is supplying numbers for those players and really trying it all together. For Orel, I think he relies a little bit more on me than Joe. Not because he’s not prepared, just as an anaylist he wants to be able to talk about things. He’s often going off what he sees with his eyes.  Maybe a pitcher isn’t locating well with his fastball, I can tell him that only 55% of those fastballs have been strikes. He can also launch into stories about when he pitched and when a pitch wasn’t working for him, what he did about it. I think both of them would be armed to be more than successful on their own, I just try to provide whatever I can to help, to try to fill in the holes, and add on to what they are providing everyday.”

He went on to heap high praise on Joe Davis – “It was obviously going to be very hard for him to step into Vin’s shoes, and kind of replace what he did, but, I’m obviously very biased. I think he does a good job of not trying to be Vin, he’s trying to provide the kind of things that Vin did, but in his own way. He’s not trying to be a replica, but he’s not saying ‘Hey, I know you guys enjoyed all those stories Vin did, but I’m not going to do any of that’. I think he’s doing a really good job of bridging that gap.” I definitely agree.

My morning was long & I am still very tired…but I am back at Dodger Stadium with my 2 best friends sitting in front of me and for that I am thankful pic.twitter.com/yAtyIJqs0Z

I had to ask about how Rick feels about Dodgers Twitter, how they’ve adopted him as their own personal stats guy, and how everyone at’s him when Hyun-Jin Ryu does anything great. “It’s surprising.  I guess I don’t really see myself as a big part of anything we do, I’m just kinda in the background. They’ve been great. A lot of times they’ll say ‘Hey, I’m sorry to ask you this, but can you tell me their average with runners on base?’ And I’m like dude, if you have a question, I can’t promise I’ll always get to it, but if I can providee information that fans want, if it’s in a positive way, I’m not going to say how many blown saves a pitcher has, I try to give back as much as I can.”

On Ryu, he laughs and says,” There’s been a couple times that he’s come up to bat and I can see the notifications showing up on my phone, and I’m like, oh no. Everyone always asks ‘Why Ryu?’ In college, I was a left handed pitcher that didn’t throw very hard, not that Ryu doesn’t throw hard, but any success I ever had was based on changing speeds, off speed pitches, just trying to out-smart hitters. So very early on, I noticed that he, at a very high level, kinda does what I tried to do out there, and he’s obviously way more successful at it, so I gravitated towards him. I told Joe ‘This is my guy, this is my favorite player’. It’s paid off for me very well, he’s been incredible. I always thought he was underrated and under valued, and now the rest of the league has found out about him. He’s now getting the recognitions, he’s now proving how good he can be.” He joked that his family doesn’t really know all that much about Ryu, but they call him “the player you love way too much”.

Joe Davis: “who would have thought that…Hyun-Jin Ryu as the All-Star game starter?”

Me, alone in my apartment: pic.twitter.com/Vp6kfsGQRz

Rick was supremely humble, and clearly is enjoying his new job in the Dodgers broadcasting department. Whether you are a stat head or just want to enjoy the game without thinking too hard, it’s clear Rick and the team do their best to make it an an enjoyable experience to listen to, regardless of what happens on the field (which mostly is pretty darn good also). I think Rick again for his time and his incredible insight into the behind the scenes look at what goes on to make the broadcast happen. You can follow Rick on Twitter at Rick_K21.