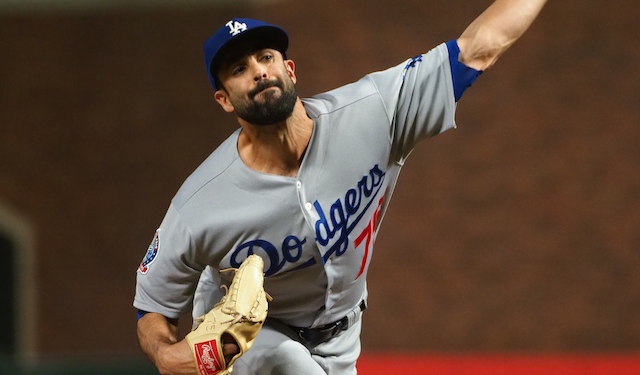 When it took Rich Hill 104 pitches to get through six innings in Tuesday’s contest against the Mets, many onlookers cringed at the fact that the Dodgers‘ relief corps would need to be depended upon to complete three full innings of work.

Four different Los Angeles pitchers appeared in the dreaded seventh inning, two of whom never recorded a single out. Ultimately, it was a grand slam off the bat of New York outfielder Michael Conforto that put the Mets ahead for good.

While it’s certainly easy to point fingers at specific pitchers, two bases on balls to begin any inning is a recipe for disaster, specifically in the later innings of a tight contest.

“I think that it’s one of those things where you have to start getting ahead,” Roberts said after Tuesday’s defeat. “The numbers don’t lie. Giving free passes, we strike guys out, we’re taking on some damage.”

Without a doubt, much of the success of the team has come at the hands of the starting rotation. By going deeper into games, it limits the use of the bullpen, thus giving Roberts many more choices as far as his late-inning options go. In effect, the starting rotation has been hiding how bad the relief corps of the Dodgers actually is.

The two most successful relief arms for the Dodgers this season have been Kenley Jansen and Pedro Baez. After those two, there isn’t really anyone close. Baez leads the relief crew with a 0.857 WHIP and a 2.73 FIP while Jansen isn’t far behind with marks of 0.957 and 3.25.

The worst stats in the bullpen are Caleb Ferguson‘s 6.84 FIP and Joe Kelly‘s 1.909 WHIP. Kelly’s 51 ERA+ is about the worst in baseball. Yimi Garcia has a FIP of 5.57, which is second-to-last on the team. Dylan Floro‘s numbers are tumbling quickly, just like we predicted a few weeks back.

For the most part, Julio Urias has thrown well, but it’s hard to view him as any type of savior, especially if a mid-season innings limit is going to be implemented.

We already talked about the possibility of adding Craig Kimbrel after June 3 without the team needed to give back a compensatory draft pick back to the Red Sox, but the right-hander still wants to be a closer. Furthermore, he’s demanding a multi-year contract for an amount which would surely push the Dodgers past the Luxury Tax Threshold for 2019, something that management appears likely to stay away from doing.

Unless boss Andrew Friedman and his crew can come up with something big during the summer trade deadline, the bullpen will continue have its fair share of both impressive and disappointing moments over the course of the season.

Let’s just hope the teams offense and starting pitching can make the ineffectiveness of the relief crew seem minimal.