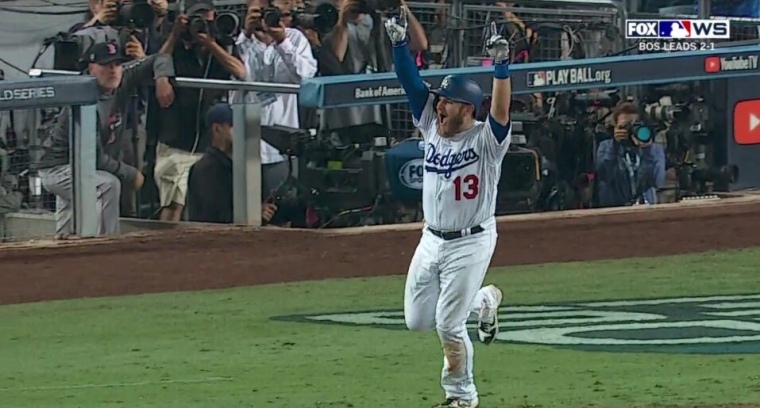 It took every bit of 18 innings and seven plus hours, but the Dodgers have finally won a game in the 2018 World Series.

Walker Buehler was on early, although not quite efficient. He had a perfect first two innings, then gave up two singles in the third, but used 55 pitches in the process.

Still, he was magnificent for a rookie, or any pitcher of any age. He allowed only those two base runners, and went seven scoreless innings. He retired 14 straight Red Sox, striking out J.D. Martinez for his seventh punchout of the game to end the seventh inning, peaking at 108 pitches. He is the third pitcher in World Series history to throw seven scoreless innings.

He did not end up getting the win, however. Kenley Jansen took over in the top of the eighth, and allowed a two out solo home run to Jackie Bradley Jr.to even the score 1-1. He recovered to pitch a 1-2-3 top of the ninth.

The Dodgers offense was lethargic, only squeaking one run through eight innings, thanks to a two-out homer in the bottom of third off the bat of Joc Pederson.

The Red Sox brought in David Price to pitch the bottom of the ninth. The dodgers failed to score, despite Cody Belinger getting a leadoff single. He left too early on a 3-2 count to Yasmani Grandal, and got caught in a rundown. Grandal followed with a walk, and the Sox countered by bringing in their closer Craig Kimbrel. Although the Dodgers had two men on, they stranded them both.

Pedro Baez came on to handle the top of the 10th inning. He walked J.D. Martinez with one out, who was replaced by Ian Kinsler as a pitch runner. Kinsler tried to take off early, and was oh-so-close to being called out on a pitch-out. On the very next pitch, Kinsler got to third on a single by Brock Holt.

But then. Baez got Eduardo Nunez to fly out to Cody Bellinger with one out, who threw a laser to Austin Barnes, who has replaced Grandal on the bases, at home, and Barnes tagged Kinsler out for the third out of the inning to preserve the tie game.

The Dodgers tried to take the lead in the bottom of the 10th, but in true 2018 Dodger fashion, couldn’t quite get that run across. Baez covered the top of the 11th, and despite allowing at two out walk to Steve Pearce, threw two scoreless innings.

Heath Hembree came on in relief for the bottom of the 11th and despite walking Barnes, held L.A. scoreless. Ryan Madson retired Xander Bogaerts, then ceded the mound to Scott Alexander, who retired the next two batters.

And then, of course, the Dodgers found a way to lose it. A chopper off the bat of Nunez scored Holt, who reached earlier on a walk. That gave the Sox a 2-1 lead. Dylan Floro entered the game, and had the bases loaded with two outs in the top of the 13th, but he got out of it.

In the bottom of the 13th, Max Muncy walked and reached second on a fly ball by Bellinger. He tied the game on a Puig single. Despite a challenge that Puig should be on second on an overthrow, the inning ended on a pop up by Barnes.

Dylan Floro came out and pitched a 1-2-3 14th inning. The Dodgers failed to score in the bottom of the frame.

Kenta Maeda took over for the top of the 15th, and allowed an infield single and a walk. Vasquez bunted, but Maeda turned and fired to third to get the lead runner. Somehow, he got out of the inning, as the game headed into the bottom of the 15th still tied.

Despite allowing a two-out walk, Julio Urias pitched a scoreless top of the 17th. The Dodgers failed to score in the bottom of the frame, despite a good at-bat by pinch hitter Clayton Kershaw, and Alex Wood took over in the top of the 18th. Despite getting a runner on first, Wood managed to get out of the inning unscathed.

Max Muncy finally took the game into his hands, with a walk-off homer in the bottom of the 18th inning.

The most lasting implication of the game may be that the Red Sox pitched their supposed Game 4 starter Nathan Eovaldi for six innings in Game 3. He threw 97 total pitches.

7 thoughts on “Muncy, Dodgers Walk Off in 18th Inning of Game 3”