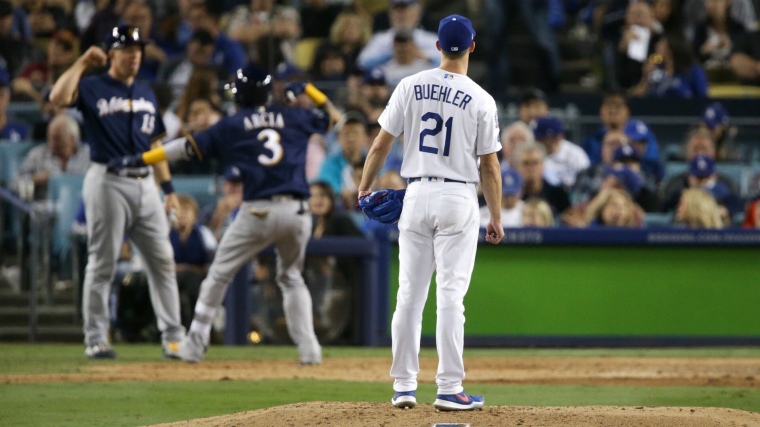 The last time the Dodgers faced Brewers’ righty Jhoulys Chacin, they teed off on him, en route to 21-5 win. But on the 30th Anniversary of Kirk Gibson‘s World Series Game One heroics, there were no theatrics to be found.

Walker Buehler started the game with a strikeout of Lorenzo Cain, but allowed a subsequent walk to Christian Yelich, which was cashed in on a double by Ryan Braun. Buehler rebounded nicely, though, by striking out Travis Shaw and Jesus Aguilar.

Dodgers got something brewing in the second. Manny Machado singles, and Cody Bellinger hits into what might’ve been a double-play but Machado slid hard, (and high, according to the Brewers), breaking up the play. Yasiel Puig finally got his first hit of the postseason with a double, putting runners at second and third with one out. Yasmani Grandal, still having a rough time at the plate, struck out. The Brewers walked Kiké Hernandez to bring Buehler to the plate. It worked, as Buehler struck out looking.

Los Angeles tried to get something going again in the bottom of the fourth, when Machado walked to start the inning. Bellinger, as in the inning before, hit into a fielder’s choice. And once again, Machado made a suspect slide into second. This time, it was reviewed and both he and Bellinger were called out. Puig hit a liner hard, but right at the third baseman and the Dodgers got nothing across the plate.

Grandal finally broke through with a leadoff double in the bottom of the fifth, but was left stranded at second base. A questionable strike call that should’ve been a walk led to Joc Pederson flying out to center to end the inning.

Buehler was still throwing well, until two out in the top of the sixth when Bellinger misplayed a fly ball off the bat of Travis Shaw, allowing him to get to third, and then score on a wild pitch.

Once again in the sixth, the Dodgers got a runner to second in the form of Justin Turner. An error by Mike Moustakas allowed JT to get to second, and it chased Chacín from the game. Corey Knebel came in to relieve him, and got the next two batters to end the inning.

Dave Roberts opted to stay with Buehler in the top of the seventh, and the plan didn’t pan out. He allowed a one-out double to Erik Kratz, and a two run homer to Orlando Arcia for a 4-0 lead. The Dodgers responded by striking out in order in the bottom of the seventh.

The Brewers threatened again in the top of the ninth against Dylan Floro, but the inning ended on a strike-em-out, throw-em-out play to second.

The Dodgers loaded the bases in the bottom of the ninth, but again it was not meant to be. The Dodgers failed to score and lost 4-0. Whether Roberts should’ve left Bueheler in the game is up for debate, but it doesn’t much matter when the offense couldn’t score a single run. Overall, the Dodgers were 0-for-10 with runners in scoring position.

Game 4 will see Rich Hill face off against Gio Gonzalez for Milwaukee on Tuesday, 6:09 PST.

One thought on “Brewers Shutout Dodgers in Game 3 of NLCS”