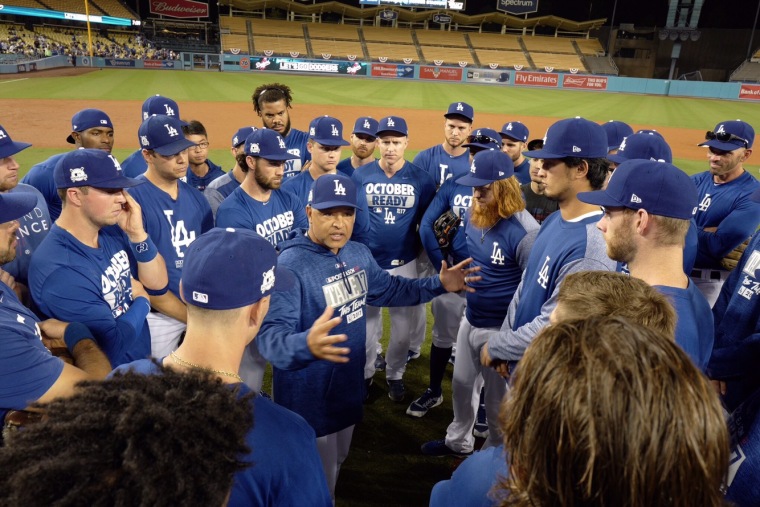 It’s been three days of watching other teams play, and now it’s finally the Dodgers‘ chance to get their postseason started. MLB was kind and gave the Dodgers the late time slot, making their game the last contest on Friday evening. Whether that will help or hurt them remains to be seen.

Their opponents in the first round, the Arizona Diamondbacks, just won an intense back and forth game against the Colorado Rockies. They come into Los Angeles raring to go, high on advancing, and knowing what happened in the last few series against the Dodgers. Their confidence is not lacking. Yesterday, Dennis highlighted some issues the Dodgers may have in facing Arizona.

The media too has been down on the Dodgers. Many L.A. columnists have put out articles about how there just isn’t enough intensity, they’re too quiet, how this year will be such an utter disappointment if they don’t win the World Series. Seemingly, they don’t seem to think that putting out this negative diatribe could hurt the team, but I digress.

“Speak softly and carry a big stick,” President Theodore Roosevelt once said. It was in regards to foreign policy, and he thought of it as “the exercise of intelligent forethought and of decisive action sufficiently far in advance of a likely crisis.” Maybe the Dodgers being ‘quiet’ could be thought of in the same way.

The quiet leaders of the clubhouse have already been making the rounds. Although Adrian Gonzalez will not be able to play due to injury, he will be in the dugout with his steadying presence. Kenley Jansen has taken on the mentor roll to many in the bullpen, as well as Yasiel Puig. Andre Ethier, the man who has been a Dodger longer than anyone currently on the roster, knows that this is the time.

“There are no banners out hanging out there saying we’re NL West champions five years in a row,” Ethier said. “The only banners you see out there are World Series championships. 104 win seasons, 90 win seasons, they don’t mean nothing unless you’re winning.”

Ethier has been through it all, many trips to the postseason where the team fell short, and years when they even contend. He’s nearing he end of his career, and wants this as badly as anyone.

Last evening, at the end of the last workout before the postseason begins, Ethier was the first to speak to the assembled group of players. Others took turns, including Clayton Kershaw and Jansen. It wasn’t a raunchous pep rally, it was leaders taking the time to speak as to the importance of the next set of games carries.

Arizona can come in hot, but the Dodgers have a quiet confidence about them. They have the best pitcher on the mound, facing a pitcher for the Diamondbacks who is not their number one or two starter. Arizona may have J.D. Martinez and Paul Goldschmidt, but the Dodgers have big sticks of their own in Chris Taylor, Justin Turner, Corey Seager, Cody Bellinger, and Puig. Los Angeles has many veterans who have been through this fight before. They have home field advantage, and an excellent bullpen. The front office and coaching staff are prepared for any situation. They have the best record in baseball for a reason. I predict that quiet determination turns into a loud celebration soon.