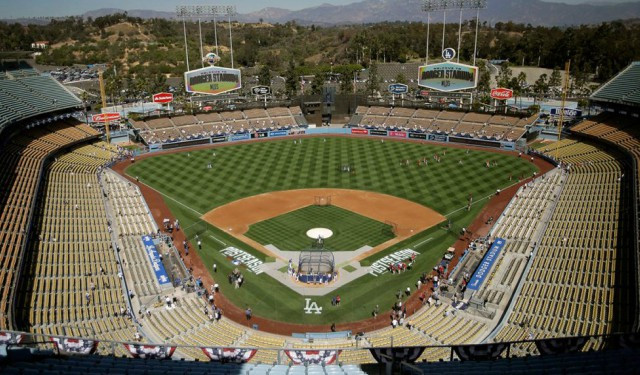 As expected, Major League Baseball officially announced on Friday morning that the 2020 All-Star Game, which was scheduled to be hosted by the Dodgers and the City of Los Angeles, is being cancelled.  However, with the Atlanta Braves already named as host of the 2021 All-Star Game in Atlanta, the Dodgers will host the next scheduled event in the summer of 2022.

Based on the health circumstances created by the COVID-19 pandemic that are beyond MLB’s control along with governmental directives prohibiting large gatherings, the league determined it is unable to conduct the All-Star Game and its week of surrounding fan activities this year.

“Once it became clear we were unable to hold this year’s All-Star festivities, we wanted to award the Dodgers with the next available All-Star Game, which is 2022,” said Baseball Commissioner Robert D. Manfred Jr.  “I want to thank the Dodgers organization and the City of Los Angeles for being collaborative partners in the early stages of All-Star preparation and for being patient and understanding in navigating the uncertainty created by the pandemic.  The 2022 All-Star celebration promises to be a memorable one with events throughout the city and at picturesque Dodger Stadium.”

Said Dodger President & CEO Stan Kasten, “As excited as we were to host this year’s All-Star Game, we know that it will be worth the wait and that Dodger Stadium and Los Angeles will host a world-class event in 2022. We’d like to thank Commissioner Rob Manfred for re-awarding All-Star Week to Los Angeles so quickly, as well as Mayor Eric Garcetti and Councilmember Gil Cedillo for their continued support of this premier sporting event, which will have lasting benefits for our community.”

Major League Baseball, the Los Angeles Dodgers, and the Dodgers Foundation (LADF) will honor their commitment to four All-Star Legacy Projects totaling $1.7 million.  Originally scheduled to be revealed leading into the All-Star Game this year, the four projects will be unveiled at another time in 2020 (or when it is safe to gather) and will benefit the communities of South Los Angeles, Downtown Skid Row, Lincoln Heights and Chinatown.

“COVID-19 has forced us to make a lot of tough calls and sacrifices; and while it may have disrupted our plans for this year, we can’t wait to welcome baseball’s best to Los Angeles for the 2022 All-Star Game,” said Los Angeles Mayor Eric Garcetti. “The Dodgers have always brought Angelenos together and baseball has helped America heal time and again. I look forward to welcoming fans from all over the world to our city and Dodger Stadium for this Midsummer Classic.”

“I am thrilled that Council District 1 – home to the legendary Dodger Stadium – will get to host Major League Baseball’s All-Star Game here in 2022. This jewel event will give Los Angeles the opportunity to showcase all it has to offer fans from across the country, and we continue to be committed to making this an event that will leave a significant and lasting impact on our community,” said Los Angeles City Councilmember Gil Cedillo.

The 2022 All-Star Game will mark the fourth time in franchise history that the Dodgers will hold the Midsummer Classic, including the third time in Los Angeles and the second at Dodger Stadium, which last staged the event in 1980.  Previously, the Los Angeles Memorial Coliseum was the site of the second All-Star Game of the 1959 season and in the franchise’s Brooklyn lineage, Ebbets Field hosted the 1949 All-Star Game.

(Jon Chapper furnished the information provided in this report)