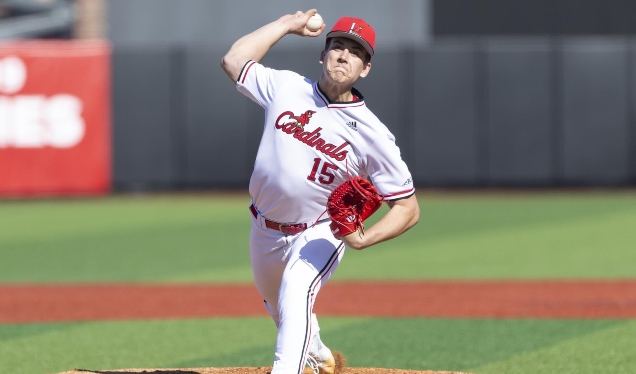 For fans of the Dodgers who were able to tune into the first night of MLB’s abbreviated 2020 amateur draft, they weren’t surprised when the club selected one of the best available pitchers with the 29th overall pick—right-hander Bobby Miller out of the University of Louisville.

The Dodgers made their pick just shy of 10:00 p.m. Eastern time, stretching the first round to almost three long hours.

“Tremendous night for the Dodgers and we are ecstatic to select Bobby,” said Vice President of Amateur Scouting Billy Gasparino. “He’s a very talented pitcher with huge upside that we are looking forward to developing into a quality Major League pitcher.  His work ethic and character will fit in well with our current culture.”

The 21-year-old Miller, who just finished his junior year for the Cardinals, is known primarily for his fastball which sits in the 96-98 MPH range. Scouting reports also show a hard slider and a changeup as part of his arsenal.

According to MLB Pipeline, Miller was the 26th best player available in the entire draft.

A few of his 2020 season highlights were striking out a career-best 12 batters, allowing one run over six innings in a win over Valparaiso, in addition to fanning nine over 6-2/3 frames in a no-decision at Wake Forest.

In his freshman season, the native of McHenry, Illinois, made nine starts over 17 appearances, registering a 2.97 ERA with 55 strikeouts and 21 walks in 66-2/3 innings.

At McHenry West High School, Miller finished his senior season with a miniscule 0.80 ERA alongside 96 strikeouts and just six walks in 52 innings pitched. He was drafted by the Orioles in the 38th round of the 2017 MLB draft, but opted to enroll at Louisville.

Miller bats from the left side of the plate.

While the Dodgers will obviously groom Miller as a starter, MLB Pipeline suggests that his future could possibly see some relief action, stating “Miller has no difficulty maintaining his stuff into the late innings. However, there’s effort in his delivery that limits his control and has some scouts wondering if he’s destined to be a reliever in the long run.”

Rounds Two through Five, including the Competitive Balance Round B, will be televised on Thursday beginning at 5:00 p.m. Eastern time on MLB Network.

In addition to their regular picks, Los Angeles also has a pick in Competitive Balance Round B (No. 66 overall), received from the Twins over the winter in the deal that sent Kenta Maeda to Minnesota in exchange for Brusdar Graterol.