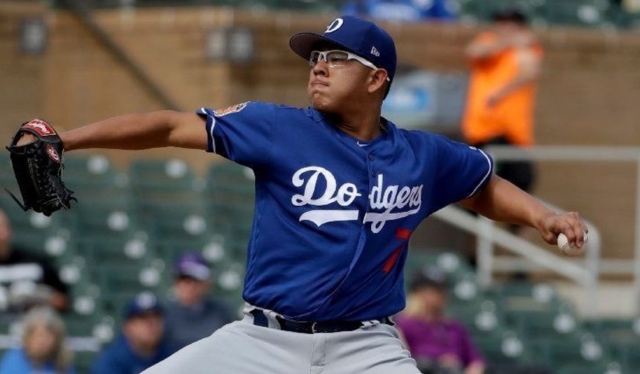 There’s been quite a bit of speculation about the way the Dodgers might handle lefty Julio Urias to begin the 2019 season. I wrote a story about three weeks ago exploring two possible scenarios, but those viewpoints have seemingly changed since the news broke about fellow southpaw Tony Cingrani opening the year on the injured list.

In her column yesterday, Andy wrote about keeping Urias stashed away at Triple-A Oklahoma City, and when considering the greater scope of things, I think I concur with her thoughts. However, if Clayton Kershaw falls victim to the injured list to start the season, it opens the door for even more possibilities for Urias to begin the year in the starting rotation.

Last Friday, Bill Plunkett of the OC Register spoke with Urias about beginning the year in the big league bullpen. By the tone of his response, the young lefty sounded as if it would be a disappointment for him to be a member of the relief corps.

“You don’t want it to be that way,” Urias explained. “You don’t want to make the team that way. You want to do your job and show you’re ready. But I do have that experience (bullpen) from the playoffs and World Series last year.”

One day later, skipper Dave Roberts told Jorge Castillo from The Los Angeles Times that he believes Urias “will be able to pitch on back-to-back days out of the bullpen this season, and that he’s going to get stretched out to four innings before Opening Day.”

Along the lines of Andy’s story, one train of thought is that the club will use Urias sparingly in the early portion of the year, saving the bulk of his workload for the stretch run of the regular season and into the playoffs. In this light, some have theorized the team will have him join the rotation at Triple-A Oklahoma City to start the year; however, if he’s on a specified innings limit, it doesn’t make much sense wasting those innings in the minors, especially if his stuff is as good as everyone says.

Maybe the best possible scenario would to have him relieve once a week or so in the minors, in order for him to stick to a specific schedule. In the majors, relievers continuously log pitches even when they don’t appear in a game—their counts often depend on how many times they’re actually called upon to get loose. Some relievers who have logged as few as 50 appearances or 50 innings during the regular season are sometimes spent by the time the playoffs roll around.

At least at Oklahoma City, Urias will be able to be carefully controlled in his usage.

Personally, I can see it playing out similarly to the way teammate Walker Buehler was utilized last year. Everyone knew that Buehler had a limit heading into the 2018 season, but nobody knew the specifics. As it turned out, Buehler threw 153-1/3 frames between the majors and the minors. He wasn’t called up to the bigs until late April, eventually staying in the rotation to make nine consecutive turns. Fans will remember him getting stung by a Trevor Story comebacker which led to a microfracture in his ribs, causing him to miss three weeks of action. Those three weeks fit perfectly into a rest period, and his innings log fell right near the 150-frame target that was set for him all along.

Consequently, it would be interesting to know if management has an exact number in mind when it comes to the number of innings planned for Urias this season.

In the meantime, Roberts says that Urias will continue to take his turn in the Cactus League rotation every fifth day. If innings and mileage are indeed the main concern, then why use up those said innings during insignificant Cactus League games?

Maybe the best bet is to have Caleb Ferguson take Cingrani’s spot as the second lefty reliever behind Scott Alexander, but that scenario could change if Kershaw opens the season on the injured list.

With less than 10 days remaining before the season opener, some hints should be revealed by management very soon.

36 thoughts on “How Will Dodgers Handle Julio Urias at Beginning of 2019 Season?”