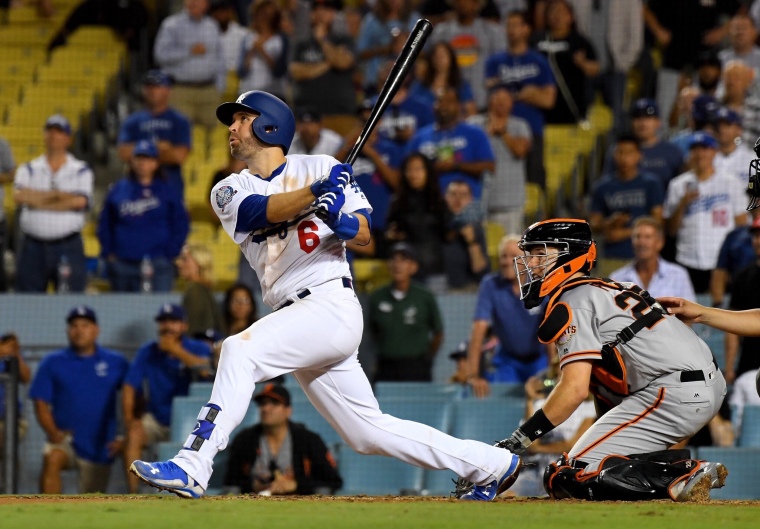 The Dodgers have been showing quite a few different looks at second base lately, perhaps indicating that they are considering several different candidates to appear at the keystone should the club be able to secure a playoff berth during the final seven games of the regular season.

At the moment, the five players who are battling to be the second base headliner are Brian Dozier, Enrique Hernandez, Chris Taylor. Max Muncy and Chase Utley.

Right off the top, it’s probably safe to say that Muncy and Utley are eliminated from being the primary starter, mainly because of Muncy’s defense and Utley’s lack of production on offense when he starts.

Muncy has garnered 13 starts at the keystone this year, with his most recent nod coming on September 11 against the Reds in Cincinnati. He’s only committed one error in those 13 games, but it’s  his defensive range that likely has bumped him out of the competition. He’ll definitely be on the playoff roster, but he won’t be seeing any action at second or third base, simply because he’s a poor defender.

While Utley has been one of the best second basemen of his generation, he’s lost a half-step on defense, and his lack of production on offense could lead him to not seeing any playoff action at all. For the entire 2018 season, he’s slashing a mere .219/.304/.313 in 160 AB, which will rival his career-low numbers he established in 2016. Nevertheless, coupled with his on-field leadership skills, he’s 13-for-37 as a pinch-hitter this year, which may give at least a little consideration for the postseason crew.

Taylor is no stranger to the middle infield, having assumed the primary shortstop role when Corey Seager was ruled out for the year after requiring elbow surgery. But the acquisition of Manny Machado bumped back Taylor into a utility role, which seemingly has affected his overall offensive production. Lately, most of his playing time has come against left-handed pitching, despite the fact that he’s actually hitting better against right-handers. Along with 17 long balls and 33 doubles, his overall .252/.328/.446 slash line isn’t too bad, but it could be his lack of stellar defense that prevents him from being the primary starter.

Along with Hernandez, Dozier is certainly one of the best defenders of the group, and if glove work was the main criteria for selecting who gets the most playing time, he’s far and away be the best option. However, since coming to the Dodgers, Dozier’s hitting a paltry .187/.304/.343 in 158 in AB, which, ironically, reminds fans as to why Los Angeles sent away Logan Forsythe in the first place. For the past several weeks, Dozier has been seeing the lion’s share of AB against left-handed pitching, but he hasn’t been impressive in the least. For the whole season, he’s hitting .216 against right-handers and .218 against lefties, and those numbers don’t appear to be improving anytime soon.

Hernandez is interesting in the sense that he’s tremendously improved at the plate against right-handed pitching this season after being known as a southpaw killer for most of his career. 12 of his 21 home runs have come off of right-handers, but perhaps the most interesting fact is that he’s garnered exactly 188 AB against righties and 188 against lefties. Still, his overall .239 batting average isn’t anything to write home about, although his .775 OPS isn’t too shabby at all.

In the end, it will be interesting to see what the Dodgers decide if the team is indeed postseason-bound. It’s hard to imagine Dozier not getting a roster spot, but his lack of offense certainly puts him in jeopardy of not being on the squad. The final decision of who gets the most playing time may come down to Hernandez and Taylor. Hernandez may have the edge on defense, while Taylor may be the better offensive option, regardless of whether it’s against left-handed or right-handed pitching.

12 thoughts on “Dodgers Roster: Who Is the Best Option at Second Base?”