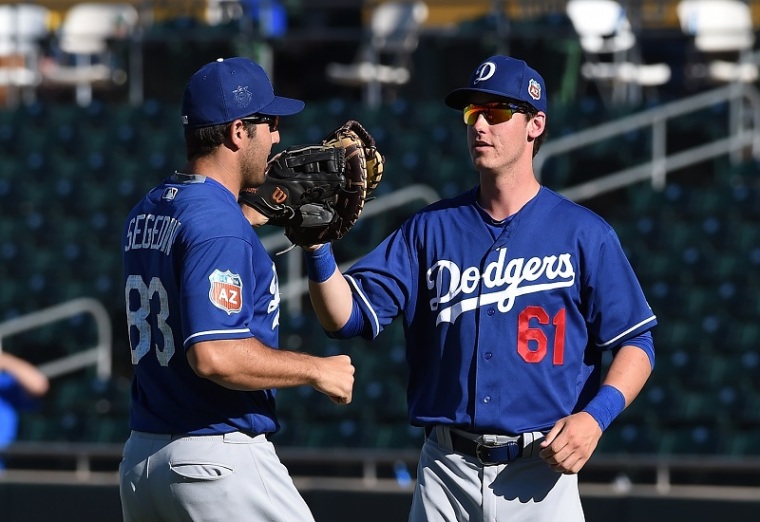 The Dodgers are undefeated so far in spring training. Who cares if there’s only been two games? Yesterday’s game was a wild affair, where the Dodgers allowed the Milwaukee Brewers to score seven unanswered runs and still won the game 10-8. Of course, in the grand scheme of things, the second game of spring training doesn’t really mean much. But let’s take a look at what does.

Rich Hill made his spring training debut and looked incredibly sharp. In the post game interview Hill said that 19 of the 25 balls coming out of his hand were the way he wanted them. He also said his curve ball was working well.

“That was there today, and it was nice” Hill said. “One of the things I’m working on is first pitch strikes. Getting ahead of the hitters early is something that’s a must moving forward. Right now it’s working on the tempo and the rhythm of the game.”

Hill pitched for two innings had two strikeouts, one walk and no hits.

The 36-year-old lefty also picked off one baserunner. He walked the first batter he faced, 2016 major league stolen base champion Jonathan Villar. Hill then proceeded to pick him off four pitches into the next at bat.

“We’ve been working on pick off in spring training and making a conscious effort of it,” Hill explained. “What you don’t see is you might see a pick off move that looks pretty standard, but you don’t realize is maybe there is a little hesitation and the timing or an extra second for a hold, or a slide–step to the plate mixed in with some longer hesitated kick to the plate from the stretch. All these little things, if you’re watching the game inside there, leads to the distraction or disruption of the runner.”

The offense looked very good yesterday, putting up 10 runs. Justin Turner, Scott Van Slyke and Chase Utley combined for seven RBIs. Rob Segedin hit his first homer of the spring. But the big story of the day was one at bat by Cody Bellinger. In the top of the eighth inning, with the score tied 8-8, Bellinger took a pitch from Brewers left-hander Andrew Barbosa and hit it out of the park. It hit the right field berm and hopped onto one of the Brewers practice fields. I saw some estimations that it went about 450 feet. It was the first hit for Bellinger in spring training this season. Manager Dave Roberts said he doesn’t think he’s a seen a ball hit that far in this ballpark. “I don’t see many guys in the big leagues we can hit the ball like that,” Roberts said. Three batters later, fellow prospect Alex Verdugo hit a solo home run to right field. Verdugo’s was also off a left-hander. While these two will not be up at the club at least for a while into the season, it’s great to see such good hits off left-handed pitching.

Speaking of which, I know we’ve talked about it before, but this year will truly be interesting to watch what happens at first base with Adrian Gonzalez. AGon’s elbow is said to be pain-free, and he could start hitting off a tee this week. Roberts said that he it is unlikely that he will be in a game before he goes to the World Baseball Classic. If Bellinger shines throughout spring training, he won’t be long in the minor leagues. If anything more happens to Gonzalez injury wise, heaven forbid, Bellinger could be up sooner than later. Or, if he is just raking in Oklahoma City, he could make his way up in the outfield, which is already chock-full of players. It will be fun to watch as the season plays out, and again I marvel at the amount of depth this organization has.

Reliever Pedro Baez was hit in the hand by a come-backer during live batting practice this weekend, and has a bone bruise on his right thumb. Exams show there was no structural damage, and he should be OK. Jacob Rhame is dealing with some tenderness in his back, and is expected to pitch again within the next few days. Brandon McCarthy pitched two innings in a simulated game on the backfield Sunday. Roberts said, “He looks good. He’s executing pitches.” The next step will be for Brandon to pitch in a Cactus League game.

Andre Ethier looked healthy in his first game of the preseason. He singled to lead off the game and went one-for-two. He was very aggressive on the basepaths and attempted to steal second base, but got thrown out. “It was nice to see a stolen base attempt, but he also had good at-bats,” Robert said of Ethier. “He keeps saying he’s back to normal so that’s good to see.”

In Monday’s game, Kenta Maeda is scheduled to make his first spring training start. The Dodgers will be back home at Camelback Ranch against the Colorado Rockies. Maeda is expected to go two innings. Other pitchers slated to start are Brock Stewart, Chase De Jong, Josh Fields, Luis Avilan and Steve Geltz. The lineup looks an awful lot like the lineup that will be used during the season, with the exception of Charlie Culberson taking over third base and Cody Bellinger at first.

On Tuesday, Julio Urias will make his spring training debut against the Colorado Rockies at Salt River Fields. At what point Urias moves back into a permanent spot in the big league rotation is still up in the air. He may have extended spring training or have a break worked in somewhere in the middle of the season. The Dodgers definitely do not want him pitching every fifth day throughout the entire season. So far in spring training, he has looked sharp. No word yet on how many innings he will have in his start.