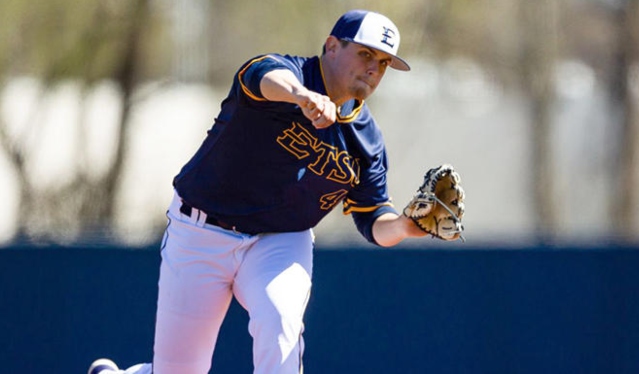 The 22-year-old Knack was selected 60th overall after finishing his shortened senior campaign with a 4-0 record and a 1.08 ERA in four starts. This season, he fanned 51 batters against one walk, leading NCAA D-1 Baseball in strikeouts and strikeout-to-walk ratio (51.0). In two years with the Buccaneers, he went 13-4 with a 2.25 ERA and 145 strikeouts over 19 starts. The Johnson City, Tennessee native pitched two seasons at Walters State Community College prior to joining East Tennessee State University, going 13-1 with a 2.93 ERA in 19 games, 16 of which were starts.

Beeter, 21, made four starts for the Red Raiders in his abbreviated 2020 season, allowing five runs over 21 innings (2.14 ERA) with 33 strikeouts against four walks. He posted a 2-1 record, including a career-high 12 strikeouts over 6.0 innings of one-run baseball to earn the victory on March 6 against Rice University. The Colleyville, Texas native was a Freshman All-American in 2019 after recording a team-high eight saves in 20 appearances with a 3.20 ERA and 39 strikeouts. The two-sport athlete was a four-year letter winner at Birdville High School, earning All-District honors his senior season after posting a 0.81 ERA with 106 strikeouts over 56 innings.

Vogel, 18, was the 100th selection in the 2020 Draft and first position player taken by the Dodgers. The UCLA commit entered the 2020 season rated the No. 59 prospect in the country by Prep Baseball Report and was listed as the 15th-best prospect in California by Perfect Game. He was a Preseason High School All-American and participated in the 2019 Perfect Game National Showcase, where he was named to the All-Prospect Team.

The 21-year-old Taylor appeared in 16 games for the Hokies this year, batting .431 (25-for-58) with seven doubles, one triple, two homers and 20 RBI. He led the team in batting average, runs, doubles, RBI, OBP and OPS, while ranking among the NCAA Division 1 leaders in OBP (27th), batting average (32nd) , doubles (34th), RBI (35th),  runs (49th) and  hits (50th). The switch-hitting catcher was a two-year starter at Virginia Tech, hitting a combined .332 (65-for-196) with 16 doubles, four homers and 39 RBI. Prior to joining Virginia Tech, the Duluth, Georgia native played two seasons at Greater Atlanta Christian and was a two-time Perfect Game honorable mention All-American and First Team All-State both his junior and senior seasons.

Stone, 21, made four starts for the University of Central Arkansas, going 3-1 with a 1.30 ERA and 31 strikeouts. On March 6 against Southeastern Louisiana, he became the third pitcher in school history to throw a no-hitter, recording 13 strikeouts and facing one batter over the minimum. In three seasons for the Bears, he posted a 9-6 record with a 2.42 ERA and 109 strikeouts against 33 walks. The Lake City, Arkansas native was a two-time All-State and four-time All-Conference player at Riverside High School. He was named the Most Valuable Player of the Arkansas High School All-Star Game in 2018.

The Dodgers completed the draft by selecting four pitchers, one catcher and one outfielder.