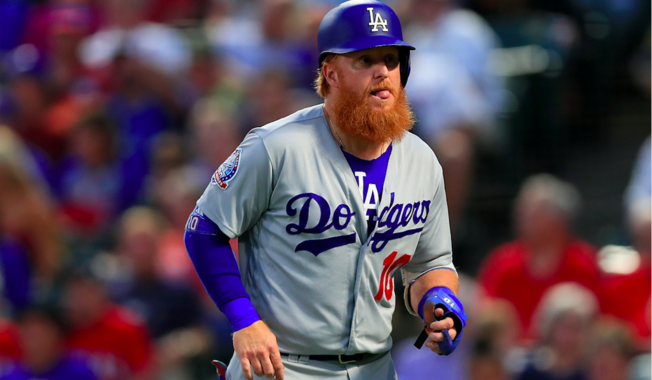 A late home-run from Justin Turner gave the Los Angeles Dodgers a come-from-behind victory over the Milwaukee Brewers 4-3 in game two of the 2018 NLCS. The series is now tied 1-1.

Heading into the game, one of the key questions was how Craig Counsell was going to handle his bullpen after pitching Josh Hader three innings in Game 1, basically leaving him unavailable for game two.

For the second consecutive game, the Brewers went with a lefty starting pitcher, most likely to force the Dodgers to start off the game with left-handed power bats like Max Muncy, Joc Pederson, and Cody Bellinger on the bench.

Wade Miley took the mound after the Brewers bullpen was immensely taxed in the opening game of the series.

Austin Barnes got the start at catcher after Yasmani Grandal had a nightmarish performance behind the plate in Game 1.

Hyun-Jin Ryu got the start on the hill for the Dodgers coming off throwing seven shutout innings in game 1 of the NLDS.

Yasiel Puig was in right field despite hitting just .197 against left-handed pitchers during the regular season.

Dave Roberts usually started an outfield trio of Chris Taylor, Kike Hernandez, and Matt Kemp against lefties towards the end of the regular season. That lineup would shift Hernandez to center field from second base, and Brian Dozier would, in turn, get the start at second.

In game two against the Brewers, though, Roberts kept Hernandez at second base, opting to put Puig in right field, Taylor in center field, Kemp in left field, and have Dozier be an option off the bench.

The Brewers made some slight changes to their own lineup, deciding to start Travis Shaw at second base after starting Hernan Perez at second for game one and Erik Katz at catcher after going with Manny Pina behind the plate in game one.

A jolt of energy ignited the crowd early when Lorenzo Cain robbed a would-be two-run David Freese homer in the top of the first inning to keep the game scoreless.

It was a pitcher’s duel through the first half of the game, with both Ryu and Miley dominating their opposing batting orders.

The first run of the game wasn’t scored until the bottom of the fifth when Orlando Arcia hit a solo homer off Ryu. Arcia had just three home runs during the regular season, and his shot against Ryu was the first he had hit this year off a starting pitcher.

Arcia also hit a home run in game three of the NLDS against the Rockies, and the shortstop looks like he’s finding his pop at the right time of the year.

The wheels started to fall off a bit for Ryu after giving up the Arcia homer. He proceeded to allow a single to Miley and a double to Cain.

Roberts decided to yank Ryu at that point, inserting Ryan Madson into the game with runners on second and third with one out. Madson issued the intentional walk to Christian Yelich, which brought Ryan Braun to the plate with the bases loaded. Braun hit a slow chopper to shortstop and Manny Machado had to settle for just one out by getting Braun at first.

Miley scored on the fielder’s choice and the Brewers lead climbed to 2-0 with two outs in the bottom of the fifth with runners on second and third.

Madson struck out Jesus Aguilar to get out of the inning without further damage. Ryu would be charged with the Miley run, and he finished with six hits and two earned runs allowed in 4.1 innings.

After Miley gave up a single to Chris Taylor with two outs in the bottom of the sixth, Craig Counsell pulled him for Corbin Burnes. Miley was outstanding, finishing with just two hits given up and no earned runs allowed in 5.2 innings of work.

Burnes faced Justin Turner with two outs and a runner on first, and Burnes got Turner to fly out to center field to end the inning.

With Mike Moustakas and Travis Shaw due up in the bottom of the sixth, left-handed thrower Alex Wood came into the game as the next reliever. Wood got Moustakas to strike out but gave up a home run to Shaw to center field to extend the Brewers lead to 3-0. Out of the 32 homers Shaw hit during the regular season, just two of them came off left-handed pitchers, who he also hit just .209 against.

What made it even more unusual was that in 168 at-bats against lefties during the regular season, Wood didn’t give up any homers.

Wood got the hook immediately after giving up the home run to Shaw, and Dylan Floro came into the game with one out in the bottom of the sixth. Floro got Kratz to ground out on his first pitch thrown and then got Arcia to line out to left field to end the inning.

The Dodgers offense got going in the top of the seventh. Max Muncy walked to lead off the inning, and that was followed by a single from Machado.

Stepping to the plate for his first at-bat and representing the tying run, Bellinger singled to center, bringing home Muncy.

That was it for Burnes, who exited the game after going 0.1 innings and allowing two hits, a walk, and an earned run.

Jeremy Jeffress came into the game facing a stressful situation. There were no outs in the top of the seventh with runners on second and first. Pederson came to the plate representing the go-ahead run and hit a blooper into right field for a single to load the bases with no outs.

Puig came up with a chance to do some serious damage. Essentially anything but a pop-up or infield line-out would score at least one run. Jeffress got Puig to strikeout. However, Barnes drew a walk the next at-bat to cut the Brewers lead to just 3-2.

Grandal stepped to the plate for his first at-bat with a chance for redemption after struggling defensively in game one. Grandal grounded into a double play, though, and the Brewers got out of the inning still clinging to a 3-2 lead.

Pedro Baez entered the game for the Dodgers in the bottom of the seventh. He issued a walk to Cain, but a potentially rough inning was averted when Bellinger slid to make a nice catch on a fly ball hit by Braun to end the inning.

Taylor led off the top of the eighth with an infield single on a slow roller to third, which set the table for Turner to leave his imprint. Turner gave the Dodgers their first lead of the game by smacking a two-run homer down the left field line off Jeffress.

That promptly chased Jeffress from the game, who finished with two earned runs allowed on three hits and a walk in one inning.

Corey Knebel came in to face Muncy with the bases empty and nobody out. Muncy singled, but Knebel got Machado to hit into a double play. Knebel completed his cleanup of the rough Jeffress inning by getting the final out when Bellinger popped up to Arcia.

Baez began the bottom of the eighth by striking out Domingo Santana, and then the switch was made to bring Caleb Ferguson in to pitch. Ferguson walked Moustakas to put the tying run on first with Shaw coming to the plate representing the go-ahead run. Shaw grounded into a fielder’s choice, and that was the final batter Ferguson faced. Kenta Maeda was brought into the game.

Curtis Granderson pinch-hit for Kratz when Maeda took the hill. Granderson hit a ball to the warning track in right field that was caught by Puig to end the inning.

Xavier Cedeno started the ninth inning for the Brewers. He was pulled after just one batter, giving up a ground ball single to Pederson.

Junior Guerra came into pitch with no outs in the top of the ninth and a runner of first. He got Puig to hit into a double play and then struck out Barnes.

Kenley Jansen came in for the bottom of the ninth to try to get the save and help the Dodgers tie this series up.

Jansen got Arcia to pop out for the first out, but then walked Perez to bring the go-ahead run to the plate in the form of Cain.

Jansen got Cain to strike out, and likely NL MVP Christian Yelich came to the plate as the last hope for the Brewers with two outs in the bottom of the ninth. Perez stole second base on a 0-2 pitch to Yelich, which put the tying run in scoring position with the Brewers down to their last strike.

Yelich grounded out to Turner to give the Dodgers the win and tie the series at 1-1 after a thrilling Game 2.