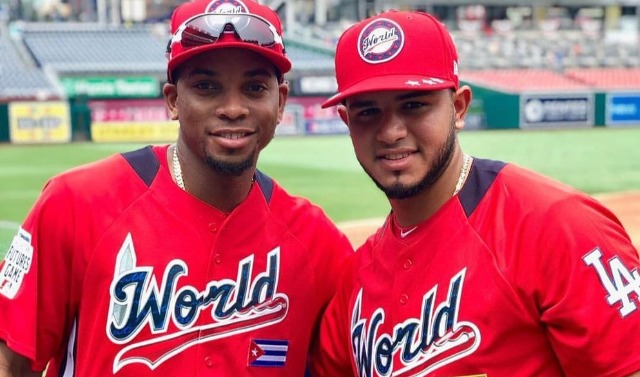 As a prelude to the 2018 MLB All-Star Game, many devout fans and knowledgeable baseball pundits managed to catch a glimpse of several potential All-Star players in this year’s Futures Game this past Sunday. The Los Angeles Dodgers sent two of their top prospects in outfielder Yusniel Diaz (ranked 4th in their system) and catcher Keibert Ruiz (ranked 2nd) to represent the club this year, both playing for the World Team due to their international backgrounds.

Diaz, one of the many international signings that the front office unapologetically splurged on back during the 2015-16 period, immediately let his presence be known on National TV when he crushed a two-run home run to right-center on a 96-mph fastball off of Detroit Tigers’ 2016 first-round pick and No. 2 system prospect Matt Manning. The blast came in the 5th inning, which brought the World Team into a 5-5 tie with the USA squad.

Later on in the 7th frame, Diaz sent a high-and inside 95-mph heater off former 2016 Boston Red Sox third-round pick (and current No. 7 system prospect of the San Francisco Giants) Shaun Anderson to left-center for his second home run of the game. His booming solo shot also brought the World Team back into a short-lived 6-6 tie with the USA Team. Both home runs came with two out, thoroughly showcasing Diaz’s apparent ability to hit in the clutch.

The 21-year old Havana, Cuba native came into pro ball having been touted for his elite-level hitting tools as well as his plus athleticism in terms of foot speed, outfield glove, and throwing arm, in particular. He was not previously known for his ability to drive the ball out consistently until this year after the Dodgers’ coaching staff spent considerable time working on maximizing his swing mechanics. As a result, he’s currently in the midst of a legit breakout campaign for the Tulsa Drillers of the Double-A Texas League and might not be long for that level anymore as he appears to be on the fast track to the majors. Diaz ended up finishing his rather impressive power display going 2-5 with 3 RBI in what would eventually become a 10-6 USA victory.

Unfortunately for his teammate, Ruiz never had much of a chance to showcase his own abilities. He was inserted into the game in the bottom of the fifth inning with two out in place of starter (and 10th-ranked Chicago Cubs prospect) Miguel Amaya and only managed to get one AB before abruptly leaving the game after taking a foul-tip to his non-glove hand on a 1-2 count off the bat of top Los Angeles Angels of Anaheim prospect Jordan Adell in the bottom of the 7th.

The 19-year old Venezuelan product has had a meteoric rise through the Dodger farm system on account of his advanced hitting tools and his ability to switch-hit with solid pull-power. His catching skills have steadily improved this year for Tulsa despite splitting time with fellow teammate (and 9th-ranked Dodger prospect) Will Smith behind the plate.

Offensively, it has been a bit of a struggle for Ruiz this year as he continues to refine his game in Double-A, yet he still remains one of the youngest players at that level, well ahead of the prospect curve. With the Dodgers arguably having the deepest cache of catching prospects in all of MLB, the organization can certainly afford to take their time with Ruiz for once if that’s the direction they ultimately plan to roll with long-term. If not, he could become a very intriguing trade piece as the July non-waiver deadline quickly looms over the horizon.

Additional notes: Former major-leaguers Torii Hunter (USA) and David Ortiz (World) were the acting managers of this year’s Futures Game. Cincinnati Reds’ prospect Taylor Trammell (ranked 3rd in that system) was the game’s MVP after going 2-for-2 with an RBI and a triple. Reds’ top pitching prospect Hunter Greene hit 102-mph several times on the radar gun during his brief outing for the USA squad.